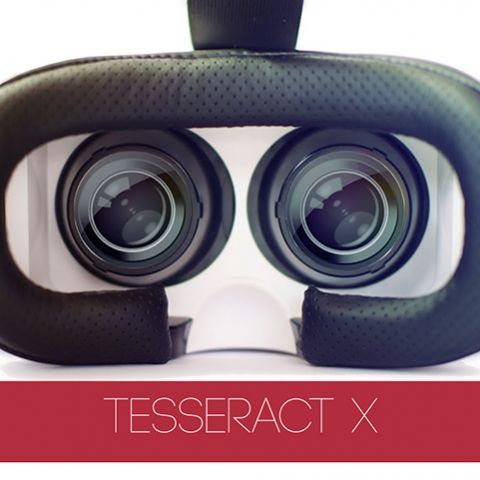 At the recently concluded Indian Games Expo (#IGX) in Mumbai, we came upon a stall with no name or number. Quite strange. Its occupants resembled young college kids, all dressed in black T-shirts with “Absentia VR” inscribed on it. Of course, we couldn’t see this tiny detail easily, nor their booth. Like a swarm of fireflies attracted to a beacon in the dark, a flood of people had congregated inside the cramped space, each one eager to try out Absentia VR’s relatively unknown invention – the Tesseract. Everyone wanted to see “the plane beyond.”

No other IGX booth saw the sort of response that this stall with no name witnessed. That was enough evidence for us to dive in and see what Absentia VR was all about.

A company started by a gang of dedicated BITS Goa dropouts, Absentia VR has created Tesseract – a head-mounted display for an interactive, immersive, up close and personal experience with moving visuals unlike anything you’ve ever experienced. Unless you’ve tried the latest pre-release build of the Oculus Rift (which we have).

From what took about a year from conception to first bootstrapped prototype, Absentia VR’s Tesseract is what you would expect any VR HMD to be. Just like the Oculus Rift, Sony’s PlayStation VR, HTC Vive, Gear VR, and other HMD projects that are currently in the works (and slated for release in 2016), the Tesseract looks like a futuristic eyewear straight out of a sci-fi movie. However, its inventors believe it has several unique distinguishing factors that make it more lucrative (for investors) and palatable (for the general audience). 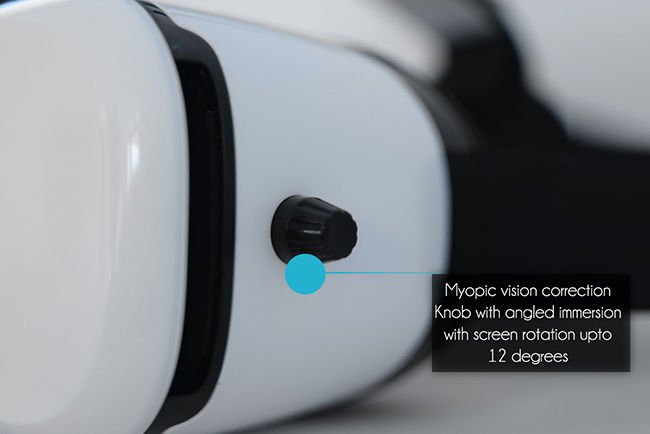 Decoding the Tesseract
The Tesseract HMD is made of plastic with cushioned lining (where it comes in contact with the head) and adjustable straps to mount the unit. It has two dials on its side to individually adjust the focal length of the lens inside (near and far) and on top it comes with an interpupillary adjustable dial to move the two lenses left or right. It has a range of sensors including and not limited to the gyro and the accelerometer. The entire system is powered by USB and an unknown ARM Cortex chip makes it tick.

The device aims to resize pixels, track your head, and generate the illusion of stereoscopic 3D via a patent-pending algorithm invented by the young minds at Absentia VR. In fact, the device’s head-tracking abilities are slated to be military-grade, capable of detecting even the slightest hint of movement. 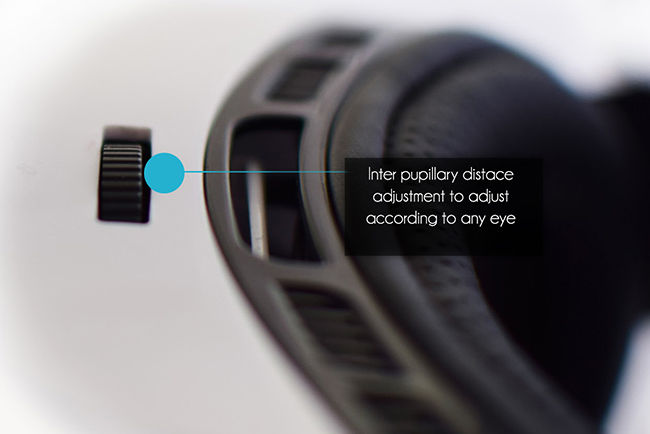 The Tesseract – currently supporting 1080p and 1440p visuals – made several claims. Shubham Mishra, Co-Founder, Absentia VR, and the captain of this fledgling hardware startup, talked about some of the advantages the Tesseract has over its competitors. Unlike the Oculus Rift and other high-end VR headsets, the Tesseract doesn’t need specialised content – it can upscale pre-existing 2D content to 3D without any lag. Their patent-pending algorithm differs with Oculus’ implementation, too, claims Shubham and his team – where the Oculus uses predictive head tracking to pre-render pixels, the Tesseract uses smart vectorisation to define the edges and depth of an object in real-time. This approach, according to Absentia VR, eliminates a hint of drift suffered by Oculus Rift.

Another achievement Shubham and his young team proudly proclaim is the fact that the Tesseract does no extra graphics computation on its part, relying completely on the PC’s discrete GPU and resources for all the visual information fed through its standard spherical magnifying lenses (we estimate) and projected into the viewer’s eyes. There was talk of having double Fresnel lenses in an upcoming iteration, but more on that later. 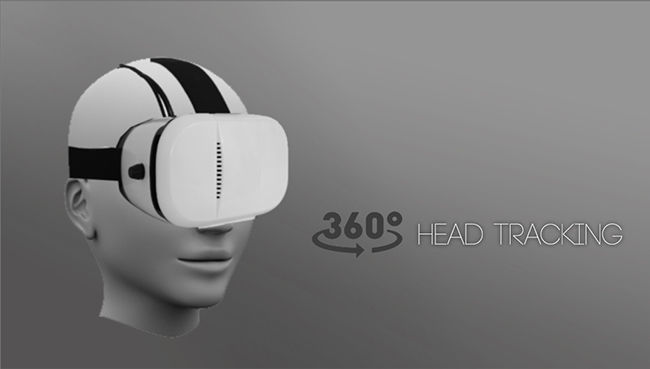 Simulator sickness or the nausea that many 3D VR users experience has been dealt with quite cleverly within the Tesseract. While we didn’t really game for hours on end, whatever little time we spent wearing the HMDs, we didn’t experience any physiological side-effects that are all too well-publicized elsewhere.

How does Tesseract work its magic?
The answer lies partly in its software. According to Vrushali Prasade, Co-Founder and Software Lead, Absentia VR, “In simple terms, our software converts 2D images / visuals to immersive 3D. We read all the pixels being displayed in real-time and map it values intelligently to create the illusion of depth.” The Tesseract’s custom software that runs on the host PC to extract frames is capable of reading image back buffers (for a visual scene) and sending that information simultaneously to the HMD as well as the traditional display monitor.

Another intelligent way to reduce nausea is done by black frame insertion and false nose illusion, according to Absentia VR. On the hardware side, Absentia VR’s Tesseract incorporates two 9-axis IMUs or Inertial Motion Units as opposed to just one that’s found on most generic VR headsets, thereby eliminating visual lag.

The team’s software prowess is highlighted by the fact that there’s not one, two but three applications that have been developed by Absentia VR to work in conjunction with the Tesseract. CORVUS is a real time 2D to 3D converter which splits the screen into a side by side stereo pair for stereoscopic imaging. The patented algorithm revolves primarily around CORVUS. AQUILA is a real time 3D walkthrough generator. So basically, it allows you to navigate an existing 3D model/environment. The rendering is performed according to relative object sizes to enable depth perception. Finally, ORION is 2D to 3D converter for panoramic images/content. It enables head tracking in a panoramic image. Examples of application would be Youtube #360Video. It also allows users to share/store content in a VR environment. 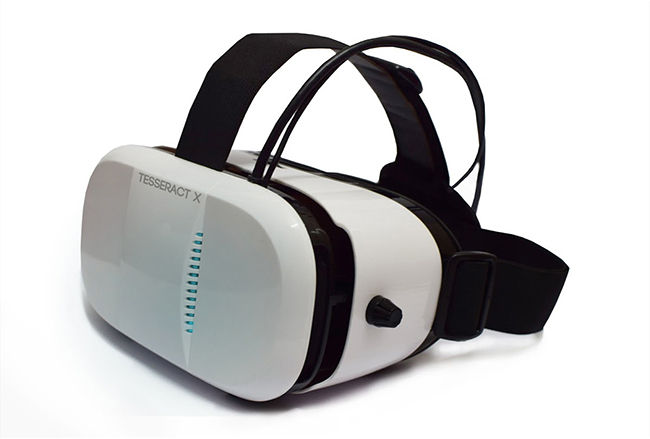 Other than gaming the team believes the device has applications in other domains as well. Industrial 3D walk-throughs, visualising CAD designs in 3D and even experiencing panoramic photos and 360-degree videos which will be getting common on YouTube and Facebook.

It’s no secret that virtual reality or VR is one of the most hotly anticipated evolutions of technology making inroads  into our increasingly digital lives. The question isn’t when as much as it is how and just how good will the experience on offer be. Let’s ask the $350 question, where essentially Absentia VR’s and Tesseract’s cookie effectively crumbles.

How does the Absentia VR Tesseract compare to Oculus Rift?
If we’re talking about performance on a scale of 1 to 10 we’d peg the immersion at a solid 6. The controls to adjust focal length work well enough and we were able to customise or tweak the device to three varying head sizes. We noticed a bit of warping of the rendered image and the FOV didn’t feel very wide. The algorithm that creates the illusion of depth by varying the sizes of the rendered objects could also use some tweaks to increase depth perception. The head-tracking mechanism was fairly sensitive and we’d give the performance on that front an 8. None of us in the team could detect the adjustment made for the “false nose” which probably means the device likely succeeded in fooling our brains. As for the nausea we didn’t try it on for more than 10 minutes at a stretch, so we can’t really comment on the long term effects, but for the duration we experienced there wasn’t any noticeable discomfort. Call of Duty: Ghosts (the game that we tried it on) looked strictly OK on the 1080p version of the device and while it looked better on the 1440p model, the trouble with this device was that the end of the screen was perceivable at the edge of the periphery of vision – not desirable. 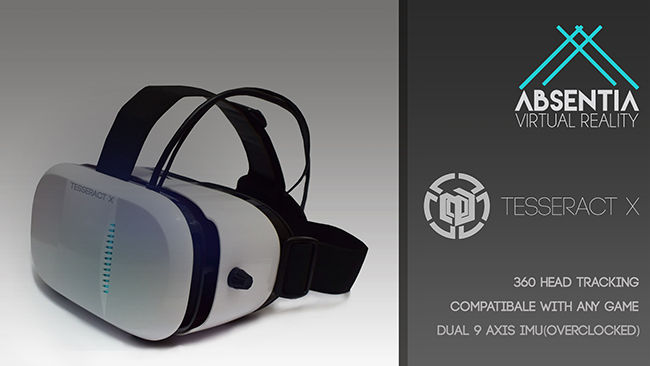 There is also another alternative to the whole VR game which we haven't honestly dabbled in as yet – an alternative that is significantly cheaper – yes we're talking about the several DIY VR projects that can potentially be a thing soon enough. The trouble with building your own Oculus  "thrift", as it's popularly known, is that you need to figure out everything from head tracking circuitry to software such as FreeTrack and TriDef3D that tracks motion and streams to your DIY HMD device.

From L-R Aditya, Shubham and Vrushali

Having spoken to the team at Absentia VR – Shubham, Harikrishna, Vrushali, Aditya and others – and Mr Salil Musale, executive director of Astarc Ventures (who recently pumped in Rs 1.2 crore or US $200,000 into the fledgling hardware startup), the Tesseract will next be showcased at CES 2016 and other conferences throughout the year and offered to technical customers (game devs, 3D artists, etc). Needless to say, we will keep a close eye on Absentia VR and see how they progress in the coming months.

(with inputs from Siddharth Parwatay)