Samsung has launched the Galaxy Tab S6 along with two new wearables in India. 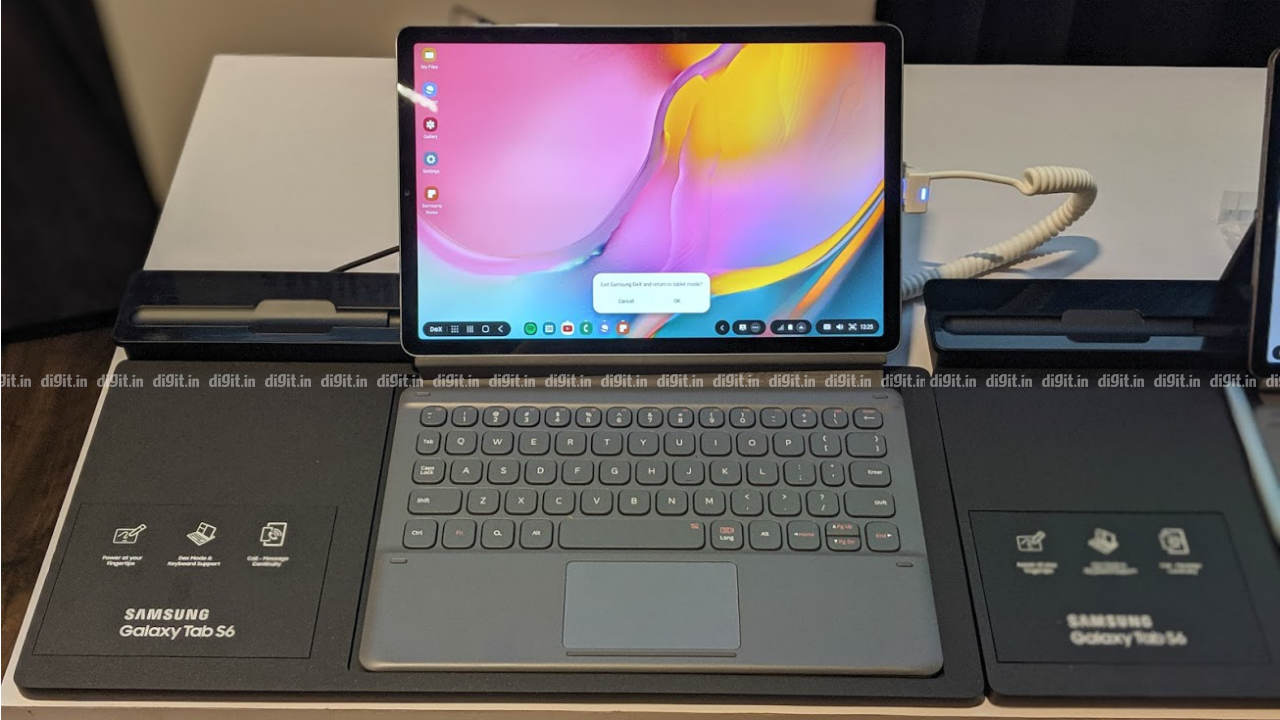 Samsung has launched the Galaxy Tab S6 along with two new smart wearables in India. The wearables include the Galaxy Watch 4G and Galaxy Watch Active 2. Sold with an optional keyboard case, the Galaxy Tab S6 is pitched as a replacement for the laptop and more as a competitor to Apple’s iPad Pro. The new range of Samsung devices will go on sale from October 11, right on time for you to make that grand Diwali purchase.

Let’s start with the Galaxy Tab S6 first. It’s Samsung’s most powerful tablet till date; it features the flagship Qualcomm Snapdragon 855 SoC along with 6GB of RAM and 128GB of internal storage (there’s expandable storage as well). Note that India does not get the 8GB+256GB variant. Previously, Samsung refrained from putting a Qualcomm chip in its high-end tablets and instead chose to go with its own Exynos processors. The switch to the flagship Qualcomm SoC should see a generous spike in performance. The performance is also necessary considering what the tablet is meant for.

You can attach the optional keyboard case (sold separately) to the tablet and use it like a convertible laptop. You also get a Samsung S-Pen along with the tablet. When not in use, you can keep the S-Pen attached magnetically to the metallic rear panel, which automatically starts charging the stylus. The S-Pen can distinguish between 4096 different pressure levels. There’s an optical in-display fingerprint sensor as well. Samsung says the S-Pen can work for up to 10 hours with just ten minutes of charging.

Samsung has also enabled the DeX mode on the Galaxy Tab S6. There’s a dedicated key on the keyboard for DeX access and a touchpad to simulate a PC-like experience. You can also connect a display using an HDMI cable (through USB Type-C of course). 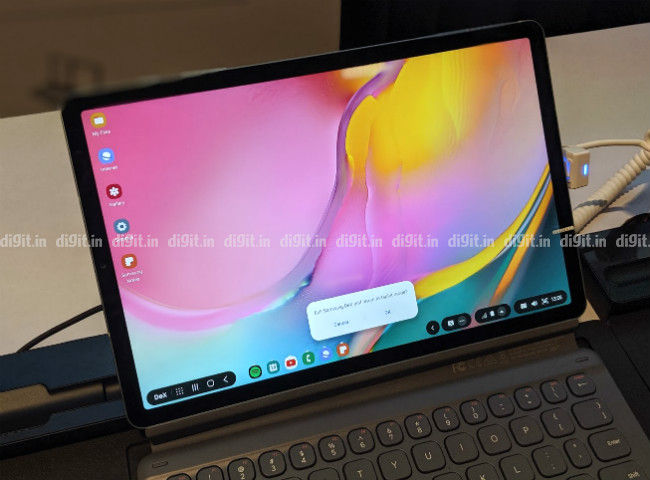 The Galaxy Tab S6 sports a 10.5-inch Super AMOLED display with QHD resolution and Samsung has optimised the UI to make good use of the large panel. In addition, there’s an improved split screen view, which allows you to choose the size of the window.

It’s also the first time that Samsung’s flagship tablet gets a dual camera at the back. There’s a 13MP primary camera along with a 5MP ultra-wide camera. Both cameras are reinforced with Samsung’s AI imaging algorithms. On the front, you get an 8MP selfie camera.

The Galaxy Tab S6 runs on a 7040mAh battery that Samsung claims can last for 15 hours of video playback. The Tab S6 comes with LTE connectivity promising downlink speeds of up to 2Gbps theoretically.

While the new Samsung Galaxy Watch 4G retains the circular ring seen on the previous model, the Galaxy Watch Active 2 goes in for a touch-sensitive haptic bezel. In other words, there's no physical dial but the function still works the same way using touch. As a result, the watch’s display now covers the entire body giving you more space to see your stuff.

On the Galaxy Watch 4G, you get the option to connect to the internet and make calls using LTE with the help of an e-SIM. It is available in two sizes: 46mm and 42mm. The Galaxy Watch Active 2, on the other hand, is offered in only one size: 44m. However, you can choose between aluminium and stainless steel materials, both of which are offered in multiple colours. 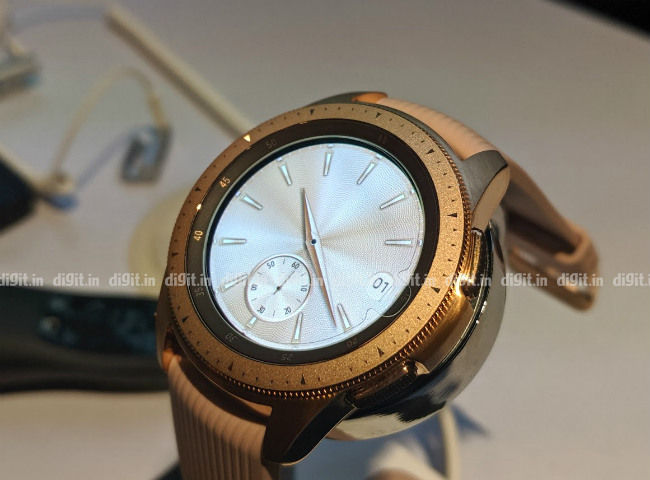 The circular display on the Watch Active 2 measures 1.4-inches and is a Super AMOLED panel with Gorilla Glass DX+ on top for protection. The display is always on. Inside it, there’s an Exynos 9110 Dual Core SoC clocked at 1.15GHz and a 340mAh battery. The Watch Active 2 runs on the Tizen Wearable OS 4.0.

There’s an accelerometer, gyroscope, barometer, heart-rate sensor and ambient light sensor in the watch. The wearable is also IP68-rated water and dust resistant and has passed MIL-STD 810G standards for durability. As for the Galaxy Watch 4G, it comes with e-SIM support. 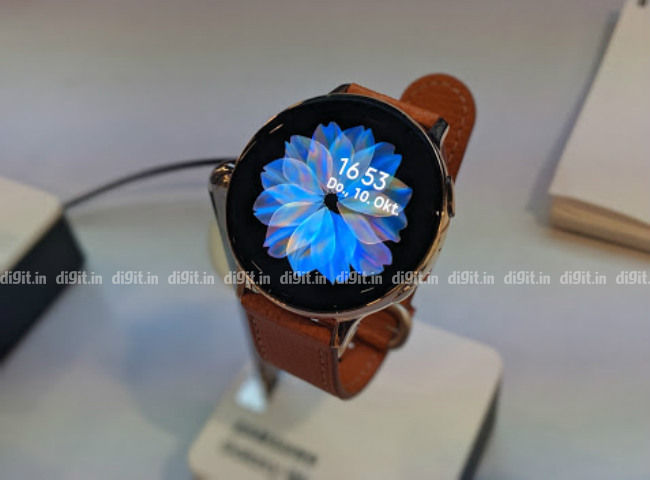 The Galaxy Tab S6 and the two wearables are already up for pre-orders and will be available from October 11 from Samsung Store, Flipkart and Amazon.in. Available in Mountain Gray and Cloud Blue colours, the Galaxy Tab S6 costs Rs 59,900 and comes with cashback offers worth up to Rs 5,000 for HDFC Bank customers. The optional keyboard cover, which normally retails for Rs 10,999 is currently selling for Rs 5,499 along with a six-month trial to YouTube Premium.