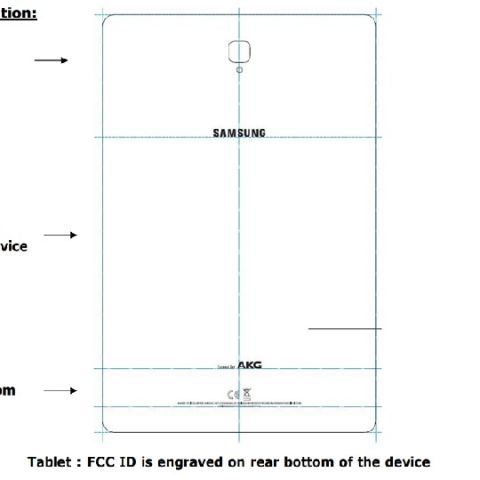 Hardly has it been a day since we saw the Samsung Galaxy Note 9 getting certified on the US FCC (Federal Communications Commission) website, and we’re already seeing another device join it. A deeper scan of the website reveals that even the Samsung Galaxy Tab S4 is now certified by the FCC.

The documents included in the website show us that the model number of the Samsung Galaxy Tab S4 is SM-T835. They also reveal that it will support LTE, like the two models before it, the Galaxy Tab S2 and the Galaxy Tab S3. Bluetooth 5 will be standard on the tablet. Also revealed are the dimensions of the tablet: 249.3mm in length and 164.3mm in width.

Going by the images in the documents, we can tell it has a single camera at the back, which is rumoured to be a 12-megapixel sensor. A tiny badge on the back that reads ‘Tuned by AKG’ tells us that the famous Austrian acoustics company has a role to play in the tablet’s audio delivery. This is an indication that this tablet could have better audio performance than its predecessors, which is definitely something to look forward to.

The Samsung Galaxy Tab S4 is rumoured to be powered by a Qualcomm Snapdragon 835 chipset, and 4GB of RAM with 64GB of storage. The display size could be 10.5 inches diagonally with a resolution of 1600 x 2560 pixels. The aspect ratio of the display is said to be 16:10. The front camera is supposedly a 7-megapixel sensor. The battery on it is expected be a 7,300mAh unit.