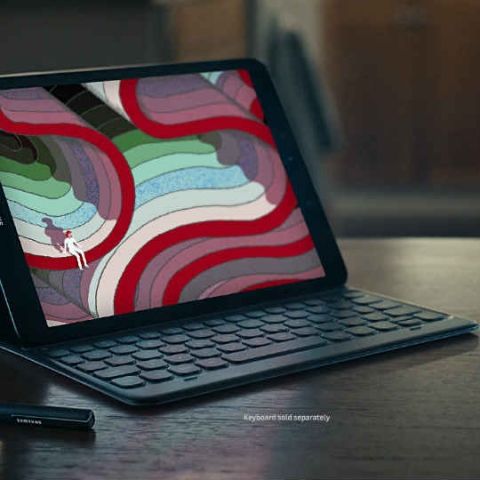 The Samsung Galaxy Tab S3 is an upgrade to last year's Galaxy S2 tablet and is a direct competitor to Apple's 9.7-inch iPad Pro. The tablet features a 9.7-inch Super AMOLED display with a resolution of 2048 x 1536 pixels and HDR support. The Galaxy Tab S3, like company's flagship Galaxy S series smartphones, features a metal and glass design.

The Galaxy Tab S3 is powered by Qualcomm's quad-core Snapdragon 820 processor clocked at 2.15GHz, coupled with 4GB RAM and 32GB storage. The tablet also offers support for expandable storage up to 256GB via microSD card slot. The tablet features four speakers tuned by AKG, and auto adjust depending on the way the device is held. Samsung Galaxy Tab S3 sports a 13MP rear camera with LED flash and a 5MP front camera for selfies.

Samsung is pitching the Galaxy Tab S3 as a productivity tablet. The tablet comes bundled with the company's S Pen for note taking, doodling and other S Pen features like translate, magnify and navigation. Samsung is also introducing a folio keyboard case that connects via the magnetic pins and turns the tablet into a 2-in-1 device. Samsung Galaxy Tab S3 is 6.1mm thick and is backed by a 6000mAh battery. The tablet runs Android Nougat with TouchWiz UI, and will be available in black and white colour options.