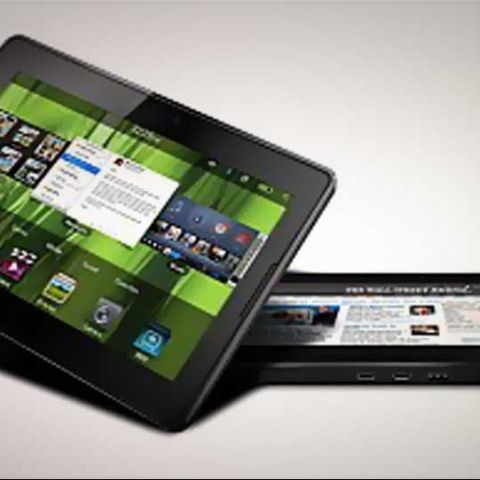 Research In Motion's iPad-rival, the PlayBook is set to hit the Indian market as the BlackBerry makers start accepting pre-orders for the device. If reports are to be believed, PlayBook will be launched later this month at a price tag of nearly Rs 32,000. The pricing apparently puts the device in direct competition with Apple's iPad 2 which is available in India at price beginning at Rs 29,500.

The PlayBook, launched in the US on April 19, failed to make an initial impact with the critics, who gave a cold response to what RIM dubbed as the “world's only professional-grade tablet”. The dependency of the device on a user's BlackBerry phone for features such as BlackBerry Messenger and Calendar came under fire from several critics. However, there are several other notable features that give the device an extra edge over the iPad. One of those exclusive ones is Adobe's Flash that is not supported in Apple's iPad, however, Android Honeycomb tablets have no issues with platform either.

PlayBook also offers “uncompromised web” browsing as it gives access to full web version. RIM says the device is well compatible with all the rich content available on Internet. In the multimedia segment, the device is loaded with a 3MP 1080p HD front facing camera and 5 MP 1080p HD rear-facing camera. The BlackBerry makers claim that the device will generate “crystal clear video” on its 7-inch LCD display and over HDMI video output. The Playbook runs on a 1GHz dual-core processor and has Blackberry Tablet OS.

It will interesting to see the sales of BlackBerry PlayBook in India where Apple's iPad and iPad 2 have already made a huge impact. The pricing, as aforementioned, will certainly stiffen competition in the tablet market though the poor reviews of the RIM device has already had will have mellowed down the anticipation for it. With the arrival of Samsung's  Galaxy Tab 10.1 and HP's TouchPad,which are expected to later this month and earlier next month respectively, the tablet market is definitely going to heat up.