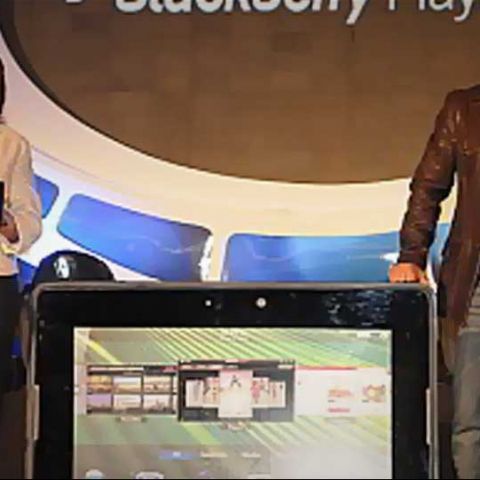 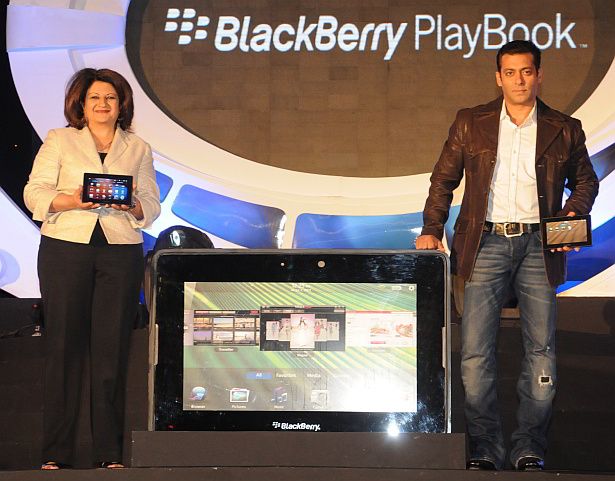 Another entrant in the burgeoning tablet market is the BlackBerry PlayBook which was launched yesterday in Mumbai. The PlayBook is a seven inch tablet which runs the QNX operating system which was acquired by RIM last year. The nifty tablet was unveiled by Bollywood actor Salman Khan, while also present at the event was Frenny Bawa, MD RIM.

The PlayBook features the same security features as BlackBerry phones and does not require a separate data or tariff plan. In other words the PlayBook would tether to your BlackBerry smartphone to access the BES (BlackBerry Enterprise Server) along with other office applications. RIM was focusing on the PlayBook's multitasking capabilities and while we were impressed by how the tablet handles multiple tasks without much stutter, we wonder how that is any different from the existing tablets, all of which boast of multitasking. The QNX UI lets you view the running applications without having to minimize them in order to switch and that's about as far it goes in offering a fresh approach to multi task.

On the specifications front the PlayBook features a 1 GHz dual core processor along with a standalone GPU. On the whole with the PlayBook RIM has ensured the tablet isn’t left behind on the specifications front. It feels pretty easy to hold and is light, weighing in at just 425 grams, however the only available screen size is seven inches. The PlayBook sports a 3 megapixel front and a 5 megapixel rear camera, both of them record in 1080p HD. It has a mini HDMI port to connect it to your LCD TV to view the tablet’s content on a much larger screen. This comes in handy while playing games or watching YouTube videos; incidentally it also has Flash support. We would’ve liked to see a few more colour options other than the plain old black that they currently have. After all, Blackberry boys are not all about the suits right?

What we liked most about the PlayBook is its ability to sync with a BlackBerry smartphone which lets you perform all the tasks only this time on a bigger capacitive touch display, however the lack of GSM capability renders its use impossible without a BlackBerry phone.

You can leverage the power of BB messenger using Blackberry bridge, however the tablet doesn't have its own PIN and mirrors it from the BlackBerry phone it is connected to. PlayBook might serve its purpose for the existing BlackBerry smartphones users but it needs to be seen how the tablet fairs when it comes to acquiring new customers and markets. Locking it to a BlackBerry phone in terms of both usability and connectivity seems like a gamble for RIM.