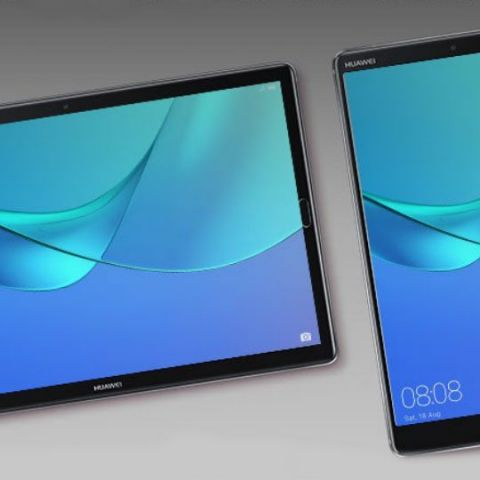 Huawei has showcased three variants of its MediaPad M5 tablet at MWC 2018, alongside the MateBook X Pro laptop. The new tablets come in three screen size variants with different features and an 82% screen-to-body ratio. They will be available in an 8.5-inch and two 10.8-inch display size models which are priced starting at EUR 349 (Rs 27,765 approx) and EUR 399 (Rs 31,743 approx) respectively. The devices will be available in Space Gray and Mystic Silver colour variants starting March, in select markets.

Both variants of the Mediapad M5 tablets are powered by a Kirin 960 SoC and feature a 2560×1600p resolution with PPI count of 359 and 280 PPI, respectively. They are powered by 4GB RAM and come with internal storage options of up to 128GB. The devices are equipped with a 13MP rear camera and come with an 8MP front-facing camera. Running on Android Oreo, the tablets sport a fingerprint sensor and support external memory expansion up to 256GB via a MicroSD card.

There's a Pro variant of the 10.8-inch MediaPad M5 as well. It features same specifications but comes with additional feature and supports the company’s M-Pen. The company says the stylus offers 4,096 levels of pressure sensitivity and the device also features a desktop-like Android experience, which can be accessed via a detachable keyboard dock.

All the tablets feature an Eye Care mode and come with a “Mini sound bar” inside. The sound on the device is fine-tuned by Harman Kardon and in terms of battery life, they boast of up to 12 hours for video playback. The devices also come with Quick Charge and 4G LTE support.