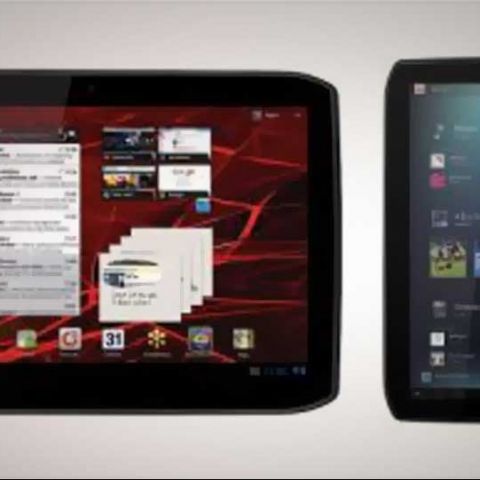 The Motorola Xoom was the platform lead device for Android 3.0 Honeycomb, and now, the company will be launching its successors, the Xoom 2 and Xoom 2 Media Edition. Both devices will run Android 3.2 Honeycomb at launch, though we expect an upgrade to Ice Cream Sandwich soon after.

Featuring a much slimmer and lighter design that seems to be inspired by the new Motorola RAZR, also featuring its splash-guard technology to protect components, the Xoom 2 and Xoom 2 Media Edition will be launched in Europe in mid-November, before a global rollout soon after. For now, pricing is still unknown. Initially, only Wi-Fi variants will be launched. The Motorola Xoom 2 and Xoom 2 Media Edition are almost as identical as their names would have us believe, with the biggest difference being screen size. Read for more details about the tablets specifications.

The Xoom 2 has a 10.1-inch Gorilla Glass display with a 1280x800 pixel resolution, is powered by a 1.2GHz dual-core processor, and comes with 16GB on built-in storage, and 1GB of RAM. No details about whether expandable storage will be available. It has a 5MP camera with a LED flash, and a 1.3MP front-facing camera. According to Motorola, the device will offer up to 10 hours of browsing time, and over a month of standby time.

The Motorola Xoom 2 Media Edition has an 8.2-inch Gorilla Glass display with the same 1,280x800 pixel resolution, and features the same processor, camera, RAM, and storage as the Xoom 2. It has a smaller battery, expected to provide 6 hours of browsing, and about half a week of continuous music playback.

Do check out the video below, detailing the two devices: