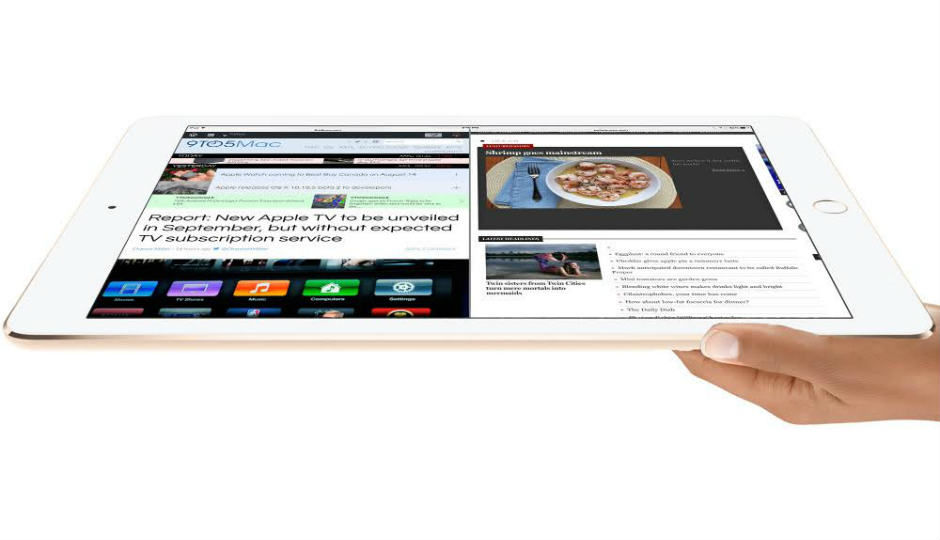 It looks like Apple will be announcing more than just the new iPhones, Apple TVs and new Apple Watch bands at Wednesday’s mega event. According to a report by 9to5Mac, two new iPads will also be unveiled - the much-rumoured iPad Pro, and a new iPad Mini. It has cited sources familiar with the iPad Pro to detail its specifications. It won’t be available immediately, but is expected to go on sale by the end of this year.

Rumours of the iPad Pro have been swirling for quite a while now. The iPad Pro will be powered by an A9X chip that is reportedly a considerable improvement over the A8X on the iPad Air 2. It was previously speculated to feature a 12-inch display. Now, it seems the device will have a larger, 12.9-inch “monster” screen. It will also allow two full-sized iPad apps in portrait orientation to run side-by-side. The iPad Pro will be fitted with four stereo speakers, a single Lightning port, and will have LTE connectivity. Unlike most other iPad models, the iPad Pro’s base model will have 64GB of internal storage. A 128GB version is also likely to be made available.

The iPad Pro will reportedly ship in Gold, Silver, and Space Gray colour variants initially. The device will run on iOS 9.1 with optimized split-screen functionality, Siri and Notification Center interfaces. Quite expectedly, the iPad Pro won’t come cheap, and will probably breach the $1000 mark. At this price, customers would be torn between the choice of a larger iPad or a MacBook. It will ultimately boil down to individual requirements and preference. Graphic designers and musicians are likely to find the iPad Pro more productive than a MacBook. The Force Touch-based stylus and keyboard will be sold separately. Apart from that, two variants of keyboard attachment are likely to be available.

The production of the iPad Pro has reportedly been delayed, and hence, it will only ship out from November. The device can be pre-ordered October onwards. Although the highlight of Wednesday’s event is expected to be the launch of the iPhone 6S and the iPhone 6S Plus, you should keep an eye out for the iPad Pro and the new iPad Mini.