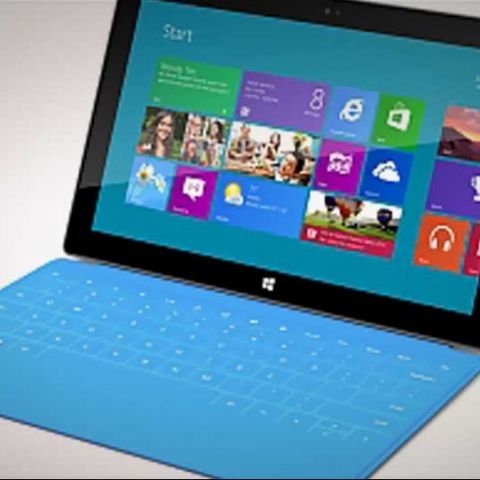 Steve Ballmer took to the stage to announce Microsoft’s latest venture into the tablet business with two devices under the company's famous Surface brand, based on the upcoming Windows 8 OS. Two versions of the tablet were revealed at the event - one running Windows RT the other, Windows 8 Pro.

The Microsoft Surface for Windows RT is 9.3mm thin and weighs a mere 1.5 pounds (676 grams). The device is made with a magnesium case, and has a PVD finish. The device bears a 10.6-inch HD display that is larger than the current market leader in tablets – the iPad that supports a 9.7-inch display. The Microsoft Surface tablet running Windows RT is expected to hit store shelves in the American fall, alongside the launch of Windows 8, but no pricing details were announced of the device. Under the hood, the RT version is powered by the Nvidia Tegra 3 quad-core processor.

Microsoft Surface for Windows 8 Pro tablet is expected to launch 3 months after the RT version and will be powered by Intel’s third generation Core-i5 Ivy Bridge processors. The Pro version is also thicker than the RT version at 13.5mm, weighs in a little more at 903 grams, and will support a full HD display. Check out the complete specifications of both Surface tablets, in the table below.

Just like the Apple iPad 2’s smart cover, the Microsoft Surface tablets also come with a cover. The biggest difference is that this cover doubles up as a keyboard as well. If the keyboard is cramped or comfortable to use is something we will only be able to say once we have our hands on the device. There are two variants in the covers available for the Surface tablets. The Type Cover has moving keys while the Touch Cover has capacitive keys.

Both covers will work with both the variants of the devices and will be available for purchase as soon as the Windows RT device is launched. No pricing details were available about the keyboards and we don’t know whether the battery in the tablet will power the keyboard or whether it will have its own power source.

In the past we have seen the keyboard dock that is an add-on to the tablet but provides extra power as well. The best example of such a dock is the one that customers can buy with the Asus Transformer Prime. Not only is the keyboard comfortable to type on, but also works extremely well in adding to the battery life of the device. We have also seen a slew of various Android and iPad keyboards hit the market.

The Surface tablets will be launched in two variants – 32GB and 64GB for Windows RT, and 64GB and 128GB for Windows 8 Pro, alongside expandable memory via microSD card. No details about 3G/4G bands was revealed.

Windows 7 based tablets bit the dust when they were launched last year, primarily because the OS wasn’t optimized for the touch screen display. Windows 8 on the other hand is a complete rehash of the OS and will not only work well with a keyboard and mouse but with touchscreen displays as well.

The biggest game changer here will be the pricing of the device. The Apple iPad is the hottest selling tablet in the market and starts at $499 and goes all the way up to $829. Microsoft will have to come up with aggressive competitive pricing if it wants to grab some market share from the iPad and the plethora of Android tablets flooding the streets.