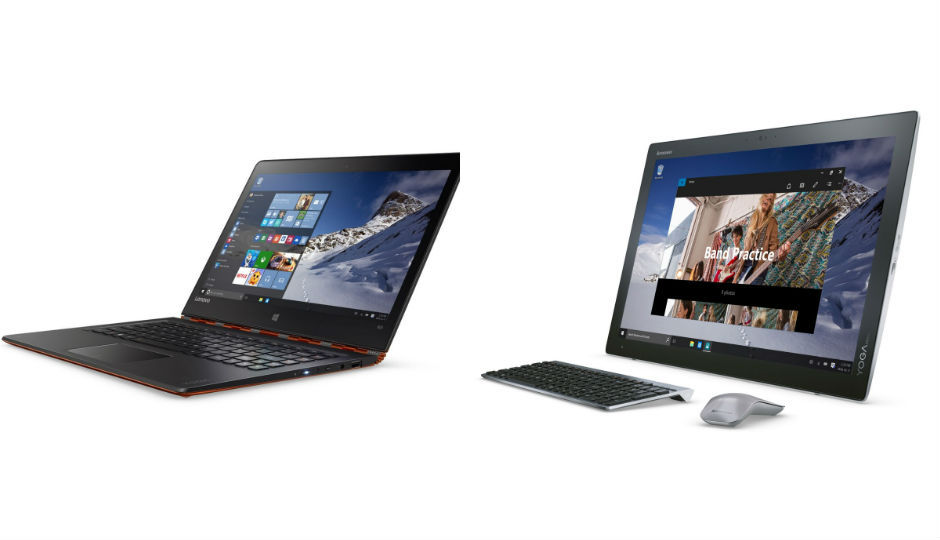 Lenovo has launched two new Windows 10 powered devices, the Lenovo Yoga 900 and the Lenovo Yoga Home 900. The Yoga 900 is a convertible laptop and prices start at $1,199.99, which is about Rs. 77,900 by direct conversion. The Yoga Home 900 is an All-in-One desktop with a 27-inch touch screen and prices for the same start at $1,549, which is approximately Rs. 1,00,500 by direct conversion. Lenovo has not yet announced the international availability of the two devices.

The Lenovo Yoga 900 laptop is powered by Intel’s 6th Gen Core i7 processor and up to 16GB of RAM. The device comes with a 13.3-inch QHD IPS display. It also comes with JBL stereo speakers as well as Dolby Audio Premium. The laptop also comes with a watchband hinge with over 800 individual pieces. The hinge lets the laptop change between its four usage modes: laptop, stand, tent, and tablet. The hinge has also been improved for smoother rotation. Lenovo also says that the battery of the new laptop has 50% greater battery density as compared to previous models. It also claims that the Yoga 900 offers up to 9 hours of video playback.

The Lenovo Yoga Home 900 All-in-One desktop comes with a massive 27-inch touchscreen with a kickstand at the back. The kickstand allows the display to be propped up on a desk or laid flat to be used a huge tabet. The device is powered by a by Intel 5th Gen Core i7 processor with an option for a NVIDIA GeForce 940A graphics chip. It also comes with an AURA 3.0 interface which includes enhanced photo facial recognition as well as photo editing features.

Lenovo is also holding an event tomorrow where it is expected to launch the Vibe P1 and the Vibe P1m in India. The highlight of both the devices is their large batteries that come with quick charging capabilities. The Vibe P1 comes with a 5,000mAh battery and a 5.5-inch Full HD display that is protected with Corning Gorilla Glass 3. The Vibe P1m comes with a smaller 4,000mAh battery and a 5-inch HD screen.