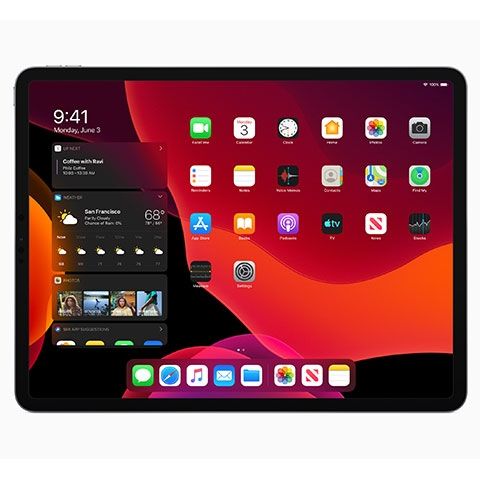 At WWDC, Apple split its mobile operating system into two. iOS will no longer be the driver of iPads as Apple has introduced a new OS for its large screen device. Called iPadOS, the software is coming this fall to iPad Air 2 and later, all iPad Pro models, iPad 5th generation and later and iPad mini 4 and later. Currently in developer preview, iPadOS will become available as a free software upgrade to all users when it rolls out officially and a public beta of the same will also be rolled out later this month.

“iPad transforms how people work and express their creativity, and with iPadOS, we’re taking it even further by delivering exciting capabilities that take advantage of its large canvas and versatility,” said Craig Federighi, Apple’s senior vice president of Software Engineering.

With iPad OS, the Home Screen gets a new layout and will now show more apps on each page. The day’s view, called Today View, can be added to the Home Screen to help users better manage their day’s activities. This will also allow users to access widgets, including headlines, weather, calendar, events and others quicker than before.

Support for External Drives and Mouse

With iPadOS, the tablet now gets support for external drives. So now, users can connect USB Drives, SD cards to the iPad. Users can also connect to an SMB Server. All of this happens through the Files app. Another big change Apple made is to add support for mouse, both USB and Bluetooth. The functionality was discovered by iOS developer Steve Troughton-Smith. For now, Apple has introduced mouse support as an accessibility feature in the AssistiveTouch options. The mouse pointer looks like a circular touch point.

These seem like a step in the right direction for creators who use iPads. It is also Apple’s way of merging functionality of Macs and iPads as part of Project Catalyst.

Split View and Slide Over

With iPadOS, users can now work on multiple files and documents from the same app simultaneously. Apple has updated Split View and Slide Over so users can also quickly view and switch between multiple apps. For example, customers can compose an email while viewing another email side by side or access multiple apps like Messages or Calendar with just a swipe.

Apple has made additions to the way the Pencil can be used with iPads. Swiping with the Apple Pencil from the corner of the iPad’s screen will let users complete tasks like mark up and send entire webpages, documents or emails. There’s a re-designed tool palette which gives users quick access to tools, colour palettes, shapes, object eraser, a new pixel eraser for removing any part of a stroke and a ruler for drawing perfectly straight lines. Apple claims, “Pencil feels even more natural, using advanced prediction algorithms and optimisations to reduce its industry-leading latency to as low as 9 milliseconds.”

We already told you that the Files App on iPads will support external storage. In addition, it has been improved to add a Column View with previews and Quick Actions such as mark up, rotate and create PDF. iCloud Drive gets support for folder sharing. Anyone with access to a shared folder will see it in iCloud Drive and will always have the ability to access the latest version.

Safari is getting desktop-class browsing on iPad. iPadOS will now automatically present a the desktop version of the website, scaled for the iPad display and optimised for touch. There’s now a full-fledged download manager on Safari and it also gets 30 new keyboard shortcuts and enhancements to tab management.

Text editing has been updated making it easier and faster to point with more precision and speed, select text with a swipe and use new gestures to cut, copy, paste and undo. Users can now use three fingers to pinch and copy text, spread three fingers to paste.

Just like iOS 13, iPadOS will also get a system-wide Dark Mode.

Apple has added fonts to App Store so users can install and use them across apps. Fonts from boutique and major vendors such as Adobe, DynaComware, Monotype, Morisawa and Founder will be available on the App Store.

Other features coming over to iPadOS from iOS 13 include - New Sign-in with Apple ID feature enabling users to securely sign into apps and websites using their Apple IDs, faster and more responsive FaceID, more optimised apps, and more.