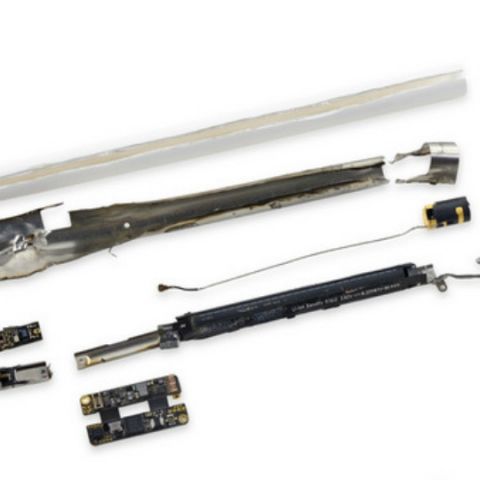 The Apple Pencil is a very difficult device to repair, according to a teardown by iFixit. The device got a repairability score of 1 out of 10, with 10 being the easiest to repair. Images and video released by iFix show that in order to completely take apart the Pencil, users will have to saw through the outer case using a specialised cutting tool like a dremel. The iPad Pro also got the teardown treatment, and got a slightly higher repairability score of 3 out of 10.

According to iFixit, the good thing about the Pencil is that the pen nib and cap can be replaced easily, if lost. It went on to try and remove the lightning cable connector located on the top of the device, but ended up tearing a flex cable in the process. After sawing away the outer case, it was revealed that the metal casing inside has a small tri-point screw, like the ones found on the Apple Watch. But even then, the metal case has to be cut away in order to access the antenna and battery assembly. iFixit said, “The pencil is clearly not meant to be opened or repaired; you can't get inside without destroying the device.” It also added, “The layers of plastic and metal holding interior components are impossible to remove without shredding.”

The iPad Pro’s teardown showed that the device is comparatively easier to repair. Since the battery is not soldered on to the logic board and and instead uses adhesive tabs, battery removal is easier. The teardown also revealed that the Smart Connector port is virtually impossible to replace, but since it has no moving parts, it is unlikely to fail. iFixit noted that the LCD and front panel glass are fused together, which does simplify the process of opening the iPad Pro. However, the fused panel increases the cost of screen repair as well as the risk of damaging the LCD, when opening. The extensive use of adhesive to hold components in place also made repairs more difficult.

Other devices to have given a repairability score by iFixit include the Nexus 5X and the 6P. The Nexus 5X was given a score of 7 out of 10 due to its use of modular components which could be replaced easily. The Nexus 6P, however, got a score of 2 out of 10, as it was very difficult to open the device without damaging the glass camera cover.