Domestic firm iBall overtook Samsung to become the top tablet vendor in India, tripling its share in the market year-on-year. 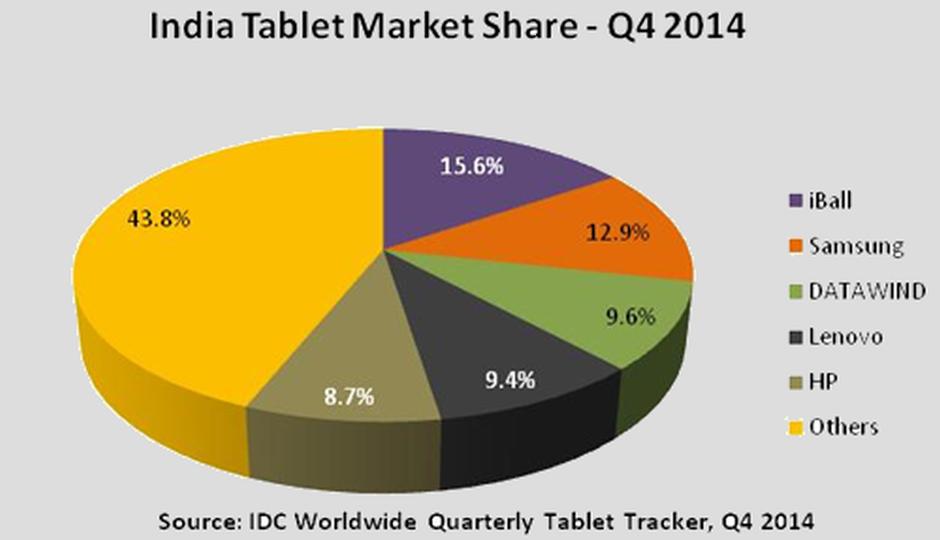 iBall has topped the Indian tablet market in the fourth quarter (October-December) of 2014 surpassing South Korean giant Samsung, according to a new reportf from IDC. iBall's market share rose from 4.5 pc to 15.6 pc, while Samsung's share dropped from 17.9 pc to 12.9 pc.

IDC said in a statement, "iBall rapidly climbed its way to the number one spot in this quarter. From a 4.5% share in Q4 2013, the brand has more than tripled its share in Q4 2014. Its growth is backed by low cost products targeted at consumers looking to own entry level form factors. The brand is actively engaged in expanding its retail presence as well as geographical reach."

The firm reported that 7 inch tablet priced at less than $150 drove the tablet market and will continue to grow in the foreseeable future. Android still has a majority of the pie, but the agency predicts that vendors will explore 8-9 inch Microsoft Windows OS based form factor going forward. The report added that Wi-Fi enabled tablets faced a steep decline over the quarters, as consumers turned towards 3G connected tablets which accounted for 60% of the total shipments.

Kiran Kumar, Research Manager, Client Devices IDC India, described the Indian tablet market trend, saying, "Consumers are driving the wave of adoption of low cost tablets as a preferred mobility solution. We are also witnessing a higher inclination of consumers towards online buying platforms and vendors are keeping up with the trend."

The firm added, "The consumer space will continue to be led by the local brands and we may see re-entry of some of the older players in the top five vendor list. On a yearly basis, we expect 2015 to post single digit growth over 2014."

Samsung has been loosing its grip in the Indian market, the company's market share has shown a downward trend during the year. Samsung is in competition with Micromax for the number 1 spot in the smartphone segment as well. Earlier, reports from research firms Canalys and GFK have pinned Samsung to the No 2 spot with Micromax as the top vendor.