HTC Flyer launched for Rs. 39,890, is over-priced for a 7-inch Android tablet 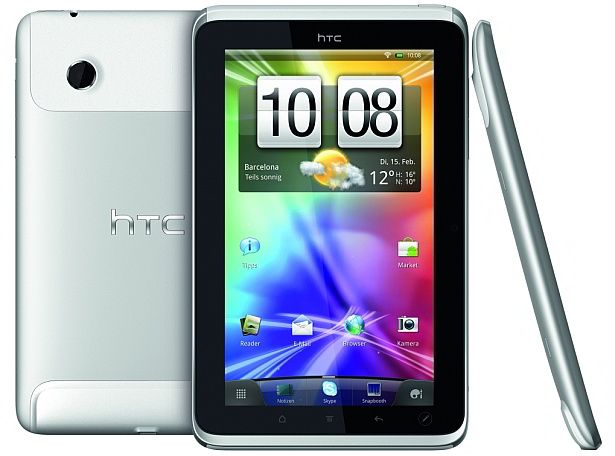 We’ve been waiting for the announcement of the HTC Flyer ever since it got listed on Letsbuy.com earlier this month. Now, HTC has officially released the diminutive 7-inch Android Wi-Fi 3G tablet in India, pricing it at a rather hefty Rs. 39,890 (MOP) – quite surprising compared to the pricing of 10-inch tablet offerings already in the country. Hopefully it will release a Wi-Fi only offering at a much lower price. The tablet comes with HTC Sense 3.0 UI onboard.

Bearing HTC’s classic aluminium unibody design, the 7-inch HTC Flyer runs on Android 2.3.3 Gingerbread, and not the tablet-specific Android 3.0 Honeycomb. We’ve known this unfortunate fact for a while now, but it doesn’t make it any easier to swallow. Somehow though, HTC has managed to overcome the biggest limitation of bearing a non-Honeycomb Android OS on a tablet, and has managed to provide access to the Android Market. Not too dissimilar to when the (7-inch, Android 2.2 Froyo-based) Samsung Galaxy Tab also offered access, at a time when no one else did. Smaller manufacturers have had a much harder time in the past. We expect the tablet to be upgraded to Android Ice Cream Sandwich (version 4.0 or 2.4), and bypass Honeycomb completely.

Looking below the hood of the 7-inch tablet, we see it has a regular LCD capacitive touchscreen with a resolution of 1024x600 pixels, a 1.5GHz single-core processor, 1GB of RAM, 32GB of inbuilt storage (expandable with microSD card), a 5MP rear camera capable of 720p HD video recording, a 1.3MP front-facing camera, GPS and A-GPS connectivity, HSPA (HSDPA 14.4Mbps, HSUPA 5.76Mbps), Wi-Fi 802.11 b/g/n, Bluetooth v3.0 with A2DP, Dolby Mobile and SRS sound enhancement, and, a 4000 mAh battery that is rated to provide up to 1470 hours of standby time, and 4 hours of video playback time.

HTC has included some interesting features that will quickly distinguish the HTC Flyer from other Android tablets available in the Indian market so far. The first of these is HTC Scribe technology, which gives the Flyer stylus support on its capacitive screen. The feature also has something called Timemark, which enables audio clips within written notes. Interestingly, the tablet has two sets of touch-sensitive controls, to be used in landscape and portrait mode.

The HTC Flyer also comes with HTC Watch support, a video download service that “enables low-cost on-demand progressive downloading of hundreds of High-Definition movies from major studios.” Lastly, but interestingly, is the tablet’s support for the OnLive gaming service, a cloud-based service that will allow users to play a variety of games online on their tablets (or stream it to their TV), including the latest PC titles, such as NBA 2K11, Assassin’s Creed Brotherhood, and Lego Harry Potter.

We aren’t sure just how well the Indian market will take the entry of the high-priced HTC Flyer, even with its interesting features and stylus-support added to the equation. Let us hope HTC realises their mistake soon enough, and re-prices the Flyer in India.