Apple’s latest tablet the iPad Pro has a smart keyboard that users can purchase separately. iFixit claims that the keyboard is impossible to repair in their teardown 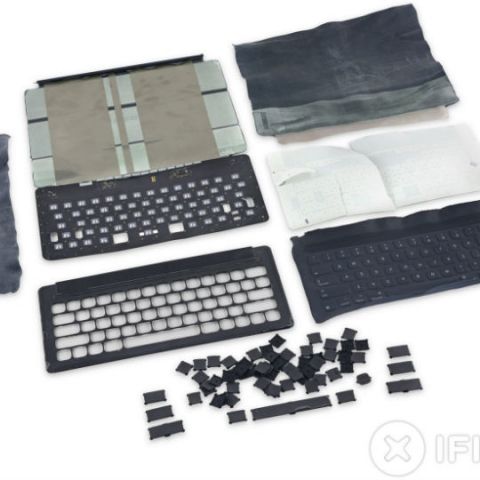 iFixit, the masterminds behind tearing down gadgets and telling you how easy or difficult it is to repair a gadget have done it again. This time they tear down the iPad Pro’s Smart Keyboard and surprisingly the device got a 0 out of 10 when it comes to ease of repair. In their conclusion, iFixit says, “While durable, the keyboard is impossible to open without damaging, meaning no internal components can be replaced without destroying the device.” So if you manage to damage your iPad Pros keyboard, its easier to invest in a new one rather than trying to repair it.

This doesn’t mean that the Apple Smart Keyboard is bad by any standards. iFixit says, “In order to make the Smart Keyboard water and stain-resistant, Apple encapsulated the entire accessory inside some high tech fabric”.

Getting a 0 for reparability means that Apple never expected the Smart Keyboard to get spoiled easily and even if it did, it would be a smarter decision to replacer it rather than repair it. This isn’t the first time an Apple device has received poor marks for reparability. In the iFixit teardown the Apple Pencil received a mere 1 out of 10 and the iPad pro itself got a 3 out of 10. If you are planning to invest in the iPad Pro or any of its accessories, you might want to be extra careful when using these devices.