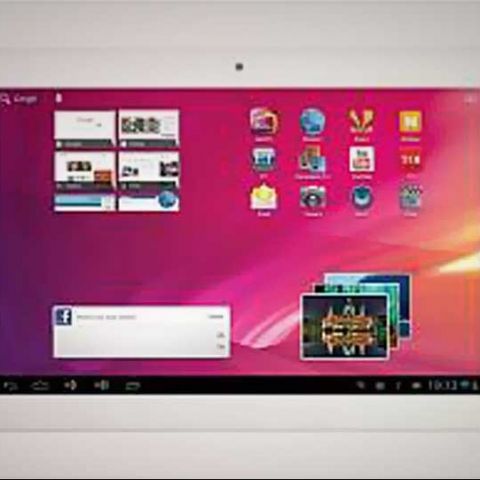 Videocon has launched a tablet in India called the VT10 for Rs. 11,200 running Android 4.1 Jelly Bean. Those interested can pick up the device through online shopping portals.

Before the end of the year, we have seen the availability of one final tablet in the market, the Videocon V10. The tablet boasts of a 10.1-inch IPS display with a 1280x800 pixel resolution. A 1.5GHz dual-core Qualcomm Snapdragon processor along with 1GB of RAM powers the device. It runs on Android 4.1 Jelly Bean straight out of the box. The tablet boasts of a 2MP front as well as a rear-facing camera. It comes with 8GB built-in storage expandable up to 32GB via a microSD card. The V10 also sports a 6800mAh battery.

The tablets supports a large array of video formats such as mp4, avi, flv, mkv, wmv, rmvb, VOB, DAT, mov, 3gp as well as audio formats that include, mp3, wav, wma, aac, and amr. The device has an HDMI-out as well. It isn’t the lightest tablet out there weighing 650 grams.

Those interested in purchasing the tablet can do so online from homeshop 18 as well as snapdeal.com.

Just last week we saw the launch of the iBerry Auxus CoreX2 3G and Auxus CoreX4 3G tablets in India for Rs. 10,990 and Rs. 15,990 respectively. If the 10-inch display of the Videocon V10 is too big for you, you can take a look at the Auxus CoreX2. It has a 7-inch HD IPS display with a resolution of 1280x800 pixels. It is powered by a dual-core 1.6GHz Cortex A9 processor, 1GB of RAM and the Mali 400 GPU. The device supports a 3G SIM card not only for data but for voice calls as well. The rear of the device houses a 2MP camera and the front has a 0.3MP camera for video calls.

Straight out of the box, the Auxus CoreX2 3G runs on Android 4.1 Jelly Bean. Auxus CoreX2 3G has 8GB built-in storage expandable up to 64GB via a microSD card. This is the first time we have seen 64GB expandable memory on a budget device. It also supports Bluetooth v4.0 and a 4,100mAh battery. You can read more details about the iBerry tablets here.