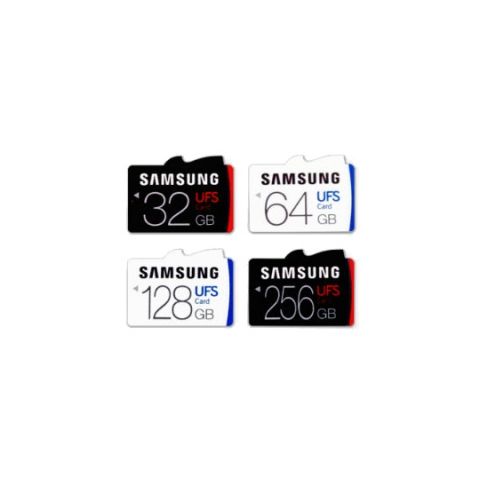 Back in February, Samsung had confirmed production of the ultra fast Universal Flash Storage based embedded memory for its upcoming flagship phones. Yesterday, they have announced an entire range of memory cards based on the JEDEC Universal Flash Storage (UFS) 1.0 Card Extension Standard, which brings the same technology to memory cards. With options ranging from 32GB up to 256GB, this new technology is aimed at high resolution photography in DSLRs, 360 cameras, drones among other uses, promising a much better multimedia experience.

The cards will have almost 5 times the sequential read speed as compared to the microSD cards available today. They will operate at 530MB/s, which is almost the same as SSDs meant for PCs. Offering a random read rate of 40,000 IOPS, this new technology promises performance that is multiple times better than that of standard microSD cards. To achieve this speed, the new UFS cards have support for multiple commands and command queueing. It also contains dedicated separate paths for reading and writing which essentially doubles the throughput possible at any point of time.

This speed typically means that a consumer phone will be able to read a 5GB full HD movie in about 10 seconds, whereas for the same task a normal microSD card would take at least 50 seconds. It is quite evident that these cards will be blazing fast. Using apps and games on smartphones directly from microSD cards (on phones that support this feature) has always been a pain due to the slow read speeds, but these cards might just make that a thing of the past.

The cards are not compatible with current microSD slots, although Samsung is expected to include them in future generation devices. Whether or not this sets a trend, that remains to be seen. But for the best interests of consumers, we sure hope it does!