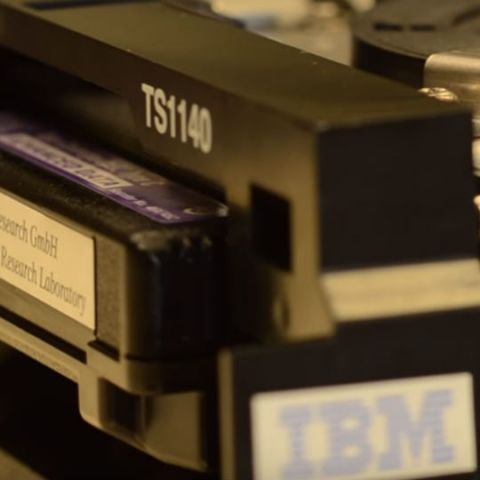 Scientists at IBM have stored 330 terabytes of uncompressed data into a cartridge that fits in your palm, setting a new world record. The new record now stands at 201 gigabit per square inch stored on a prototype magnetic tape, which is over 20 times the areal density that current commercial tape drives use. For the uninitiated, areal density is the measure of information stored in a given area of surface. In comparison to this achievement, the first tape unit by IBM had used half inch wide tapes, which could store 2 megabytes of data. The new technology allows potential storage capabity of 201 billion bits per square inch on magnetic tape.

“Tape has traditionally been used for video archives, back-up files, replicas for disaster recovery and retention of information on premise, but industry is also expanding to off-premise applications in the cloud,” said Evangelos Eleftheriou, fellow at IBM, in a statement. IBM is using sputter magnetic tape this time, which Eleftheriou says can cost a little more to manufacture as compared to current commercial tape drives. However, the capacity for storing such vasts amounts of data can make the price irrelevant.

Researchers at IBM developed several new technologies and the company also worked closely with Sony, the pioneer in magnetic tape storage. “The results of this collaboration have led to various improvements in the media technology, such as advanced roll-to-roll technology for long sputtered tape fabrication and better lubricant technology, which stabilizes the functionality of the magnetic tape,” Eleftheriou said.