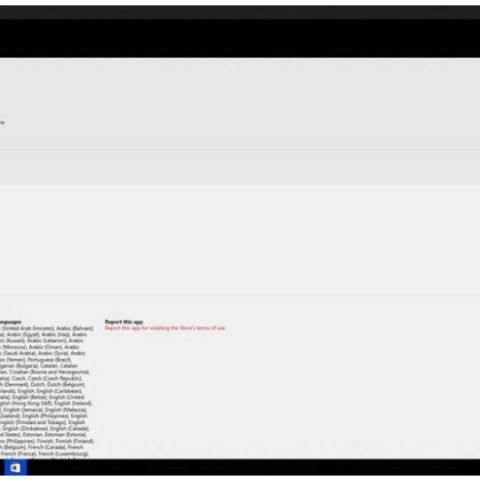 The screenshot was first posted on Twitter by AngelWZR. It also shows Make More Space, a smartphone app by HTC to keep users updated about their available storage space on their phone. The app features on Windows store with an install button.

Rumors suggest HTC could also be teaming up with HTC for a new smartphone running Windows 10. After successful stint with HTC One M8 with Windows Phone, HTC may look to capitalize on momentum with next flagship rumoured as HTC One M9.

One of the key features of Windows 10 operating system is support for universal apps. “Universal Windows apps and the ability to leverage the same code to deliver appropriately tailored experiences to multiple device types were the centerpiece of that announcement... The most important thing you should take from today’s announcements is that the best way to prepare for Windows 10 is to keep building universal Windows apps,” Microsoft had said in a detailed post.

Also read: Microsoft Windows 10: Eight new features that you should know about

Microsoft is gearing up for a January event where the company is expected to reveal more details about Windows 10. Windows 10 adding support for all devices could help Microsoft boost its digital marketplaces for Windows and Windows Phone as well as give a tougher competition to Google's Play store and Apple's app store.