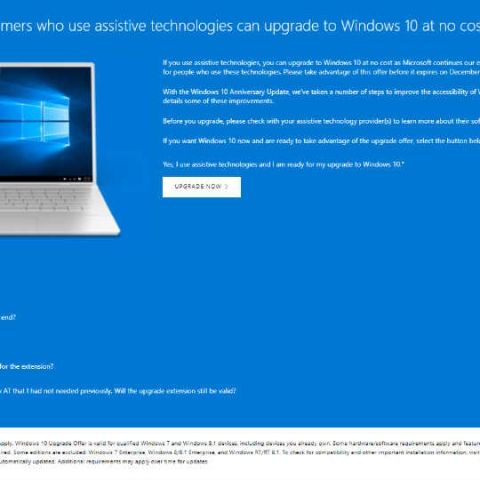 Microsoft says it will stop pushing out free Windows 10 upgrades to all users on December 31, 2017. To recall, the Redmond-based software major announced Windows 10 in 2015 and offered it as a free upgrade to existing Windows 7 and Windows 8.1 users. The company stopped free upgrades to Windows 10 back in July 2016, but the upgrade was available for free to those who used the accessibility features as an extension of the promo.

Microsoft has now quietly updated its site to reveal that free upgrades will end for those using accessibility features at the end of this year. Microsoft has not explained the reason for ending the free upgrades, but the extended promo was announced primarily to give users more time to experience the accessibility features, which were offered as part of the Anniversary update that was rolled out in July 2016. Since then, Microsoft has announced multiple updates for its operating system and released the Windows 10 Fall Creators Update last month.

Microsoft claims Windows 10 has an install base of over 500 million users and ZDNet reports that the end of free upgrades will have minimal impact on the user base. Most individual users are already expected to have made the switch to Windows 10 as part of the free upgrade programme last year. However, Microsoft's larger base is the corporations running systems on Windows XP or Windows 7, which are yet to upgrade to the latest version of Windows and their upgrade process won't be limited to the availability of free upgrades.

According to NetMarketShare Windows 7 is the most used desktop operating system with a market share of 46.6 percent, while Windows 10 follows with a share of 29.26 percent. The data also indicates that Windows 10 has grown from 9 percent market share in November 2015 to 29 percent in October 2017. Microsoft is pitching Windows 10 as the single operating system used across broad range of devices including PCs, Xbox consoles and Windows Mobile devices. While Microsoft has formally bowed out of the smartphone segment, it is continuing to lead the PC segment despite slowdown in sales.