A series of videos show Windows' Live Tiles are going to be more interactive and capable. 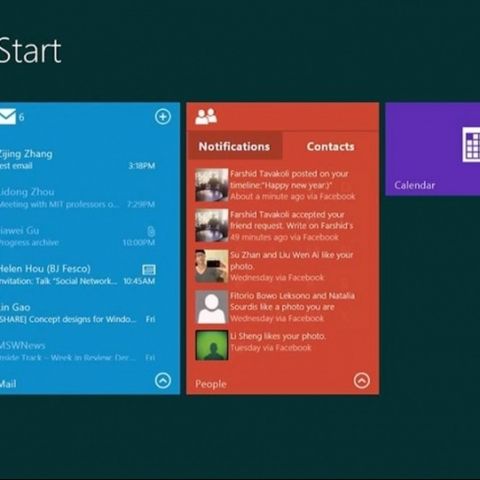 Microsoft is reportedly working to make Windows' Live Tiles more interactive with new features such as displaying additional information on expanded tiles without needing to open individual apps. The new Tiles are going to make it easier for users to respond to notifications as well.

According to reports, new Tiles expand when tapped and show relevant content right on the Start screen instead of opening an individual app. For an example, Mail app shows a list of e-mails in an expanded view. The new feature is pretty similar to Android widgets.

Microsoft is also testing a new feature called Desktop Interactive Tile. The new Tile creates the list of programs open on desktop mode, making them accessible through the modern UI. Users can access the tile from the sidebar on desktop.

Microsoft took down videos detailing the new features from its website, but not before Windows Blog Italia managed to duplicate them. Here's what the official description of the new features said:

“This project features an Interactive-Tile UI system that enables users to access and manipulate Live Tiles in an interactive way with touch gestures. Interactive Tile's UI is responsive and flexible to an app's content and function. Users can provide quick input to the Interactive Tile on the Start screen. With a perception of Start as an entrance page, Interactive Tiles were introduced to empower the start screen with an intermediate access level to applications.”

It's not yet confirmed whether these feature will ever see the light of day. But, it clearly shows Microsoft is looking to make its flagship operating system more interactive and easy to use. Further integration of modern UI with traditional desktop environment is certainly going to boost current and forthcoming iterations of Windows.

That said, check out the much-talked about videos showing the new Tiles in action below. Also read: Windows 8.1 Update 1: All you need to know about the new features