Microsoft is killing legacy applications like Outlook Express, Reader app and Reading list with the upcoming Windows 10 Fall Creators Update. Microsoft Paint made its debut with the launch of Windows 1.0 in 1985 and is widely considered as the first graph 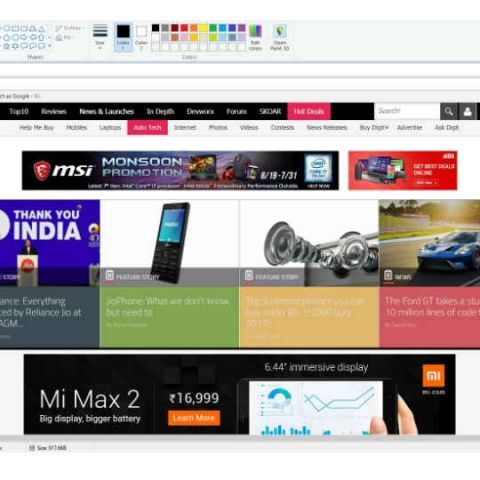 Microsoft is planning to kill legacy Windows applications, MS Paint and Outlook Express with the upcoming Windows 10 Fall Creators Update. The Redmond-based software giant has published a detailed list of features that will be removed from the upcoming update of Windows 10.

Microsoft Paint made its debut with the launch of Windows 1.0 in 1985 and is widely considered as the first graphic editor used by a large audience. MS Paint remains one of the core features of Windows and is often the first graphic editors learnt by children. Since its debut, Paint has reshaped itself from a 1-bit monochrome licensed software to a quality graphics tool. The legacy code is now being killed in favour of an upgraded Paint 3D.

Microsoft announced Paint 3D, a new version of Paint that works alongside traditional Paint application with the Windows 10 Creators Update. Apart from basic 2D image editing, the new Paint 3D also supports 3D image making features and is a deviation from traditional Paint application. While Microsoft doesn't market Paint 3D as the successor to Paint, it will now be seen as the legitimate successor.

Microsoft is also trashing Outlook Express, Reader app and Reading list with Windows 10 Fall Creators Update. The legacy Paint was never a full blown app and Microsoft somewhat capped its functionalities to bitmap imaging. It also served as a handy tool to scribble text and for quick copy and paste functionality.

With Windows 10 Fall Creators Update, Microsoft is killing some of its legacy applications and paving way for modern applications built on the company's universal windows platform. Microsoft has not confirmed the precise date for Paint's removal, but it's possible that Windows users won't appreciate the move.