Apple may reveal new dark mode and news app for macOS 10.14 at WWDC 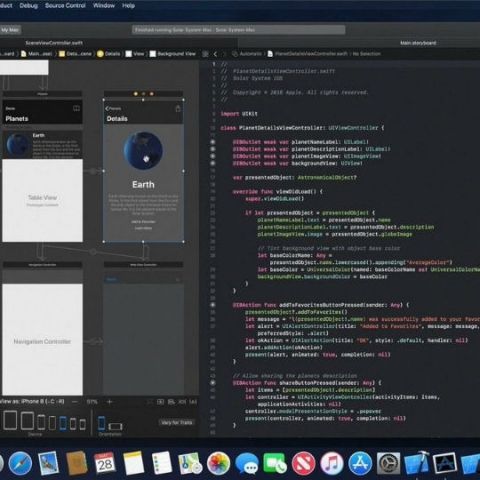 Ahead of its annual 2018 Worldwide Developers Conference (WWDC) in San Jose, California, a leak by a developer has showed that Apple may launch a dark mode in macOS 10.14 and a new News app. The event, which will take place from June 4 through June 8, might see the launch of several updates to iOS, macOS, tvOS and watchOS.

The present macOS has a dark mode but it only reflects in the dock and menu bar.

According to a report by MacRumours, developer Steven Troughton-Smith discovered a 30-second video on Apple’s servers that reported to have showed Xcode 10 running on macOS 10. The developer said that he found the video within an API on the backend of the Mac App Store. The video showed that the Trash icon in the dock is darker which suggests a system-wide dark mode, including in apps. The video also showed an Apple News icon in the dock.

Interestingly, the desktop background is a picture of Mojave Desert in California during the night. This might mean that the name of the next version of macOS could be Mojave.

Taiwan-based market research firm KGI recently reported that Apple’s new line of MacBooks is likely to show better year-over-year (YoY) growth in unit sales, between 13-16 per cent in 2018, which will be better than both iPads and iPhones. KGI analyst Ming-Chi Kuo said that he was positive on the outlook for Apple MacBook. He also reiterated his prediction of a new more-affordable MacBook Air in the pipeline for release this year.

Apple was earlier reported to launch the successor to the iPhone SE at WWDC this year, but it looks like the phone might not appear at the event afterall. Bloomberg recently reported that "people familiar with the plans" said that Apple will not announce any new hardware at all this time at WWDC. Instead, the California-based multinational tech giant will focus on software improvements. Also, according to a report on a Chinese website, Apple is set to launch an upgraded iPhone SE later this year. Chinese website QQ states the upcoming could be powered by the Apple 10 chipset coupled with 2GB RAM and could be available in 32GB and 128GB storage variants.

The website also claims that the phone could retain TouchID, which makes sense if Apple wants to keep the phone priced below $500. What seems unlikely however is the website’s claim that the iPhone SE 2 will have a 4.2-inch display instead of a 4-inch one. If indeed Apple has to fit a newer screen, it has to overhaul the current manufacturing process and design a new one. In fact, Kuo had said the refreshed iPhone SE will retain the size and dimensions of its predecessor, so it it unlikely that the new iPhone SE will receive a screen size refresh. According to the analyst, the iPhone SE won’t even have wireless charging and FaceID.