With iOS 12, one will get to use third-party apps like Google Maps, Waze and more with Apple’s CarPlay. The Stocks and Voice Memos apps have also been updated and will also be available for download on the iPad. 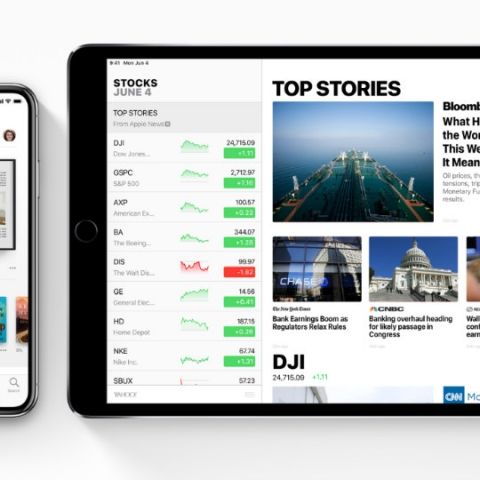 Apple made a barrage of announcements at the WWDC 2018 event and alongside the major announcement of iOS 12, the company also highlighted some new and important changes coming to CarPlay, Apple News, Stocks, Voice Memos and iBooks (which is now renamed to Apple Books).

The new update for CarPlay will finally add support for third-party navigation apps like Google Maps, Waze and others. Currently, one can only use Apple Maps for directions but with the new changes, Apple is easing up and not completely restricting its users to the Apple ecosystem.

The Apple News app has also received a minor improvement with a new Browse tab. The app has been redesigned for making it easier to find relevant news.

Further, the Stocks app is now headed to the iPad alongside the Voice Memos app. The new version of the Stocks app has been completely redesigned for helping a user keep track of the stock market with “live stock quotes, charts, and the best financial reporting from Apple News.”  The Voice Memos app will soon be able to sync directly with iCloud for easier access to recordings across Apple devices.

Finally, the new Apple Books features an entirely refreshed design to discover, read books and listen to audiobooks. There are not many new additions, except that the app now comes with a “Reading now" feature, which shows a user where they left off. This option has been long due for the app as it is already present in many other ebook readers on the App Store.

Apart from the aforementioned updates to its apps, Apple has also introduced automatic strong passwords feature. It is said to automatically create and save complex passwords for all of the user’s apps and websites, in apps and Safari respectively so that one can use stronger passwords without having to remember them. There’s also a security code AutoFill option, which displays One Time Passcodes as AutoFill suggestions for a user’s convenience.

You can read our coverage of iOS 12, ARKit 2 and more from WWDC 2018 here. Know more about Animojis, Memojis and Group FaceTime announced at the event here and about tvOS 12 and watchOS 5 here.