Adobe announced the new and updated 2015 version of their Creative Cloud tools and services on the desktop including Photoshop CC, Illustrator CC, Premiere Pro CC and InDesign CC. Not only just desktop tools, the company also released several mobile apps for iOS and Android. They also launched their new stock content service Adobe Stock that will be directly integrated into the creative tools and products. The company also announced the inclusion of more features into their enterprise offerings in terms of administration, security, collaboration and publishing services. 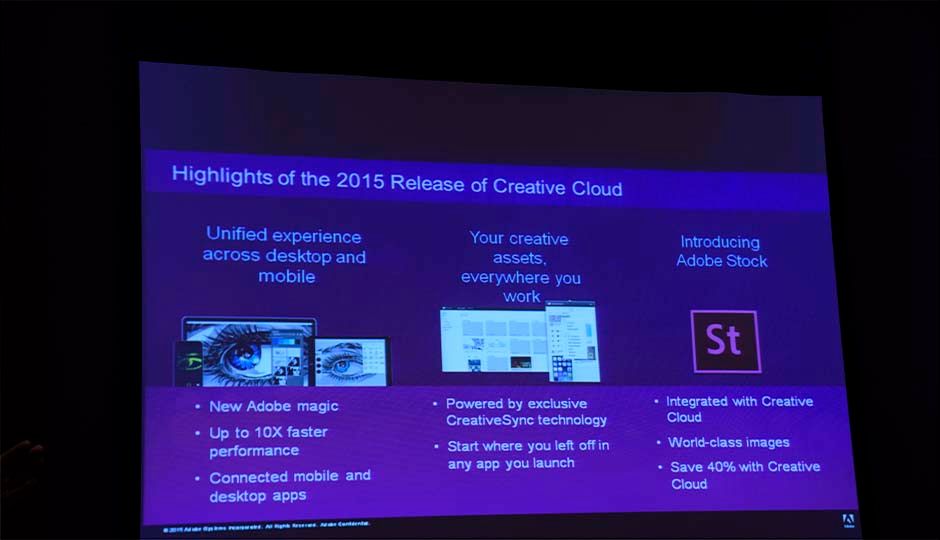 The Creative Cloud 2015 release consists several upgrades to the desktop applications where Photoshop CC introduces a new feature called Artboards that lets the users design cross-device user experiences right inside Photoshop and also preview them on a device. Lightroom CC and Photoshop CC both get a new feature called Dehaze that eliminates the fog and haze in photos. Premiere Pro CC has a new feature called Lumetri Color panel that claims to have powerful colour correction capability just through sliders and Morph Cut that makes it easier to have better interview content and have a seamless sequence. After Effects CC will now have uninterrupted preview so that artists won’t have much problems while playback during editing. Illustrator CC apparently is 10 times faster and 10 times more precise than CS6. With Adobe’s Mercury performance engine, InDesign CC will be have faster zooming, scrolling and paging. Adobe Muse will give you access to premium fonts from Typekit.

Lastly, Adobe also launched their stock content service Adobe Stock that claims to be creating and making about 40 million photos, vector graphics and illustrations directly accessible to the users within the CC applications and tools. Adobe Stock will be available in 36 countries and 13 languages and is expected to arrive in India in the near future. Adobe Stock will also be available to users who aren’t part of the Creative Cloud service, where they’ll be able to download, buy and sell stock images.

Pricing for India
The updates to the Creative Cloud services and mobile applications are already available to the existing CC members at no additional costs. For Individual users, Adobe CC is available in three flavours – Photography Pack (consisting of Photoshop CC and Lightroom CC) for Rs 499 per month, Any Single App for Rs 1000 per month, and the full Adobe Creative Cloud app suite for Rs 2,700 per month. For students and teachers, Adobe is offering an especially attractive access to Creative Cloud's entire app suite for just Rs 1000 per month. For more pricing details for business users and large enterprises, visit Adobe CC's pricing page.