Speed of Light caught on tape at 10 trillion FPS 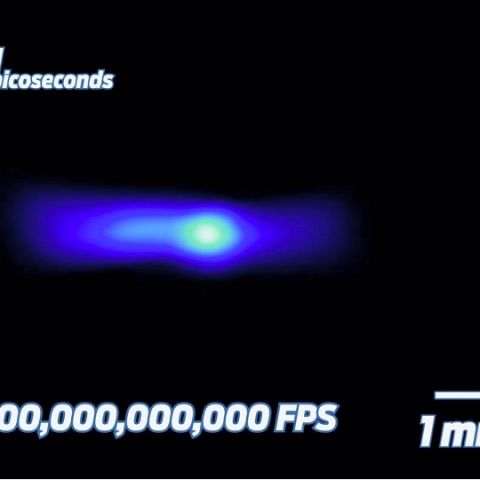 You’ve got to admit: slow motion videos are pretty cool. We’ve all come across slow motion (or “slow mo”) clips of everyday occurrences on TV, like a water balloon bursting, a bullet being from a gun underwater, jelly bouncing about on the cone of a subwoofer, stuff like that. But the latest video from The Slow Mo Guys on YouTube tops all of that—it shows a beam of light visibly passing through the entire length of a tiny vial. We must remember that light is the fastest thing known to humankind; it travels at 299,792,458 metres per second.

To achieve this video, show presenters Gavin Free (Gav) and Daniel Gruchy (Dan) headed to the WM Keck Engineering Laboratories at the California Institute of Technology, where they were able to get their hands on “the world’s fastest camera” for a small set of experiments. Called the T-CUP (trillion-frame-per-second compressed ultrafast photography), the camera is capable of achieving single-shot, real-time imaging speeds of up to 10 trillion frames per second, which is a hundred times greater than the fastest camera out there.

In the first experiment seen in the YouTube video, the duo record a beam of laser light passing through a small bottle of diluted milk at about 100 billion frames per second with the help of Postdoctoral Scholar Peng Wang. At that speed, the beam takes approximately 2,030 picoseconds to travel from one end of the bottle to the other. For reference, one picosecond is one trillionth of a second (0.000000000001 second).

In the second experiment, Wang traps the light beam inside a tiny cavity called “chaotic cavity”. It has mirrors on the inside walls and is covered in water vapour. Shot at 100 billion frames per second again, the beam of light passed into the cavity is seen bouncing off the mirrored walls furiously (about 25 times in a span of 2,500 picoseconds).

In the third and last experiment, the trio use a tiny rectangular vial of diluted milk to shoot a beam of light at 10 trillion frames per second. The beam is seen passing through the entire length of the vial  (which is only a few millimetres long) in less than 50 picoseconds assuming an indefinite ghostly “blob” shape. According to the duo, the T-CUP’s next upgrade might let it capture video at 1 quadrillion frames per second. Watch The Slow Mo Guys’ video below; it’s really quite cool: