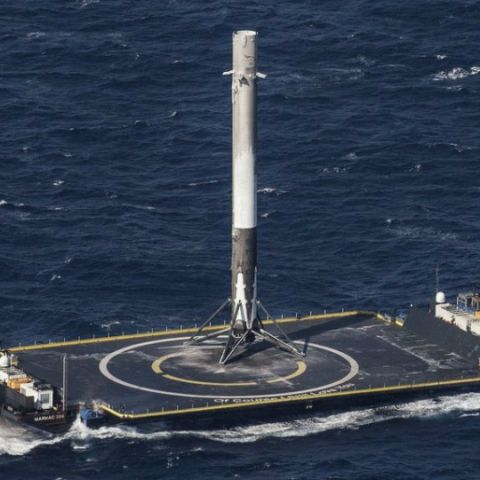 Ever since SpaceX successfully pulled off its first ever successful landing of its Falcon 9 rocket back in December 2015, we have been waiting for the moment when it will be re-launched into space. Earlier today, SpaceX declared that the CRS-8 booster that was a part of the first successful Falcon 9 sea landing mission will be reused in delivering the SES-10 telecommunications satellite. This marks a historic moment in the saga of affordable space missions, and we hope that the launch is executed successfully.

The CRS-8 booster used in the first stage of the Falcon 9’s first successful sea landing mission was used to deliver a payload to the International Space Station. This mission, confirmed yesterday by satellite company SES, will deliver the SES-10 satellite into orbit. This is not the first rocket that SpaceX has successfully retrieved after a mission. The first one was landed back on solid ground back in December 2015, and has now been placed in SpaceX’s museum, permanently. This one, the first one to have landed on a drone ship after a few failed attempts, will now attempt a re-run back into space, taking the nascent stages of reusable rockets one step further.

Reusing rockets for regular space missions can reduce the overall expenditure of exiting the Earth’s atmosphere and reenter by about 30 percent, saving significantly on developing paraphernalia as well as cutting down on rocket fuel. Since its heavily lauded entry into the space race, SpaceX has gone on to pull off multiple successful sea landings on unmanned drone ships out in the sea. It has so far recovered six rockets after successfully completing its missions, and the upcoming mission will be the first one to test the reusability of recovered rockets.

SpaceX’s reusable mission with the SES-10 satellite will be undertaken some time in the coming months, and SpaceX will look to collect data from the mission that will be vital for more rockets to be reused in future. We cannot wait for the day to come, and have our eyes and ears trained for more information on this.