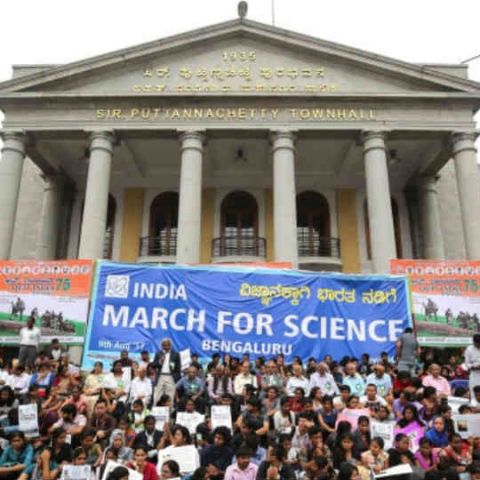 A nation-wide march by Indian scientists saw thousands walk in solidarity for science and respect for technological research. The movement follows in the footsteps of the Global March for Science held earlier in April.

A lack of respect for scientific research, coupled with a dire need of funding, and an orthodox government promoting unscientific ideas, is what led to a multi-city protest by members of India’s scientific communities on August 9.

The march was led by India’s technology hub, Bengaluru, with more than 1000 scientists taking to the streets. In the national capital, a milder strength of 200 walked with placards and messages reading “Defend science, not defund science,” “Stop killing science for your personal and political agenda.”

The events of Wednesday were organised by the Breakthrough Science Society (BSS), a non-profit organisation dedicated to safeguarding and promoting scientific thought. Demonstrations led by Kerala-based BSS spread across 40 cities in the country, following in the footsteps of the global March for Science which took place across 600 cities worldwide in April.

In a call to India’s scientific community, BSS highlighted some of the causes motivating this nation-wide gathering. “Scientists from India have played a commendable role in the discovery of gravitational waves and of Higgs Boson, in the interplanetary mission through Mangalyaan and in reducing foreign dependence through the development of indigenous satellite launching capability. But, on the other, science in India is facing the danger of being eclipsed by a rising wave of unscientific beliefs and religious bigotry, and scientific research is suffering serious setback due to dwindling governmental support.” 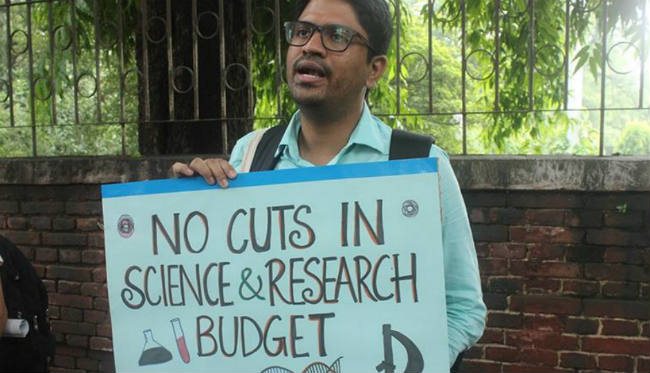 The excerpt points at issues that have been a subject of scrutiny and debate in the country, particularly centered around the defunding of IITs, NITs, and IISERs, some of India’s premiere technology education institutions. Universities across the board are reporting a lack of funds for scientific research, while funding agencies like DST, DBT and CSIR are reportedly impacted by reduced governmental support, says BSS. Scientists in government labs are being asked to sell their inventions “to generate a part of their salary,” add the organisers.

"The march is not a protest," Meena Kharamtal, one of the organisers of the rally in Mumbai told Al Jazeera. A research associate from the Indian Institute of Science told the publication, "Funding for basic science in India is facing a grave situation."

Satyajit Rath, an immunologist  who took part in the demonstration in Pune told Nature, “We felt that the global march was more to do with the Trump administration’s anti-science perspective, and not related to Indian science problems.”

In India, a politically motivated society of cow vigilantes also irks scientific minds in the country who are reportedly being asked by the government to investigate the health benefits of cow products such as milk and urine. Scientists gathered in the march were also looking to demote such religious prejudices. This, coupled with the fact that investment in research and development remains as low as 0.9% of the country’s GDP, was what sparked the movement. The march organisers feel funding for research in India should be 3 percent of the country’s GDP.

Those present at the event were reportedly optimistic thanks to the large turn-out in support for science. However, an acknowledgement from the government is yet to be seen as India’s scientific community calls on it to reinforce Article 51A of the Constitution stating the duty of all Indian to "develop the scientific temper, humanism and the spirit of inquiry and reform."