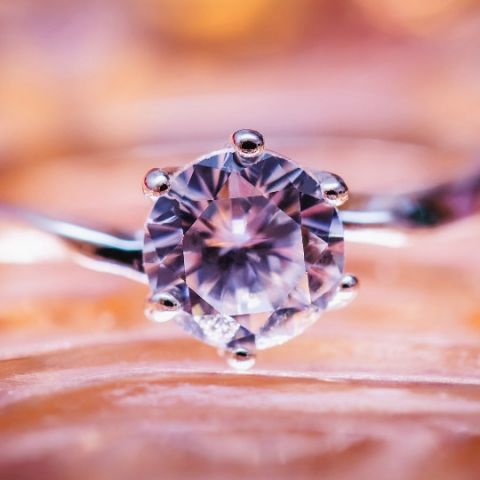 A team of researchers from MIT has just concluded that there may be roughly a quadrillion ton of diamonds in the Earth's Mantle. The study concludes that this treasure trove of what is considered to be a rare mineral is buried somewhere roughly 160 kilometers beneath our feet. It is possible that the mineral rock we've considered very precious and rare is not so rare after all.

The findings were published in the Journal of Geophysics, Geosystems and is based on decades of seismic activity data collected by researchers while trying to reconstruct what the inside of the earth is made of. This reconstruction is based on collecting decades worth of seismic data collected by seismographs which measure the movement from within the Earth. This movement could be attributed to the shift of the tectonic plates (which causes earthquakes), but also many other phenomena. The waves that are generated by the movement move at specific speeds depending on the density of the matter they move through.

During the reconstruction, when researchers stumbled upon certain areas called cratonic roots, which are the older and most immovable parts of a tectonic plate. Cratonic regions are sometimes projected as upside-down mountains within the Earth's crust going as deep as 320 kilometers. Scientists noted that the seismic waves moved faster through this particular region, with no apparent explanation.

To explain this discrepancy, the team started plugging in potential material densities to figure out what exactly comprised of these Cratonic Roots. The team concluded that the change in speed could only be explained by the fact that these areas must comprise of 1 to 2 percent diamond. By all accounts, that is a negligible amount in comparison to the mass of the cratonic roots, but in comparison to the currently known diamond deposits, it's about a 1000 times more.

"This shows that diamond is not perhaps this exotic mineral, but on the [geological] scale of things, it's relatively common," senior author Dr. Ulrich Faul of MIT said in a statement. "We can't get at them, but still, there is much more diamond there than we have ever thought before. It's circumstantial evidence, but we've pieced it all together," Faul added. "We went through all the different possibilities, from every angle, and this is the only one that's left as a reasonable explanation."

Diamonds are formed under extreme heat and pressure, usually, the kind found about 3200 kilometers deep within the Earth's surface. This is the area between the Earth's mantle and core where temperatures hit 4000 Celsius. The heated plumes of gas rise towards the upper layers of the Earth and sometimes, they hit a rock called Kimberlite on the way. Diamonds are found within Kimberlite, along with volatile materials, which cause massive explosions when heated. These Kimberlitic explosions are the reason for diamonds being pushed closer to the surface of the Earth, where they are safely mined. According to scientists, the last known Kimberlite explosion was 40 million years ago, and no one has seen a kimberlite explode.

While the discovery of roughly a quadrillion ton of diamonds may sound exciting, there are two big challenges that lie in the way of mining corporates. First is the depth at which the Cratonic roots exist. As per the published paper, the reserves are somewhere 160 kilometers below the Earth surface, extending further by another 300-odd kilometer. The deepest mine in the world at the moment happens to be the Mponeng Gold Mine in South Africa, extending to 3.9 kilometers beneath the Earth's surface. The new diamond reserve won't even show up till we've gone 160 kilometers into the ground. In fact, the deepest we have managed to bore into the Earth is just 12 kilometers which is the Kola Superdeep Borehole. It is just 9 inches in diameter, a width that is unlikely to fit any mining equipment through it. The second challenge would be actually finding the diamonds. Given that diamonds only comprise 1-2 percent of the Cratonic Roots, even if we manage to drill into them, finding the diamond deposits will be like trying to find a needle in a haystack.