Saturn's rings are already through half their lifetime, says study 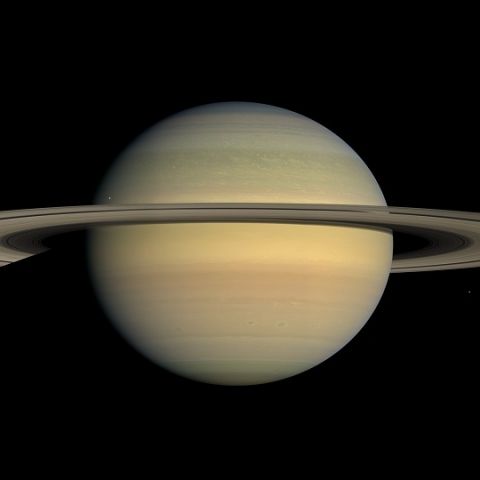 A new study predicts that the rings around Saturn have less than 100 million years of life left.

For you, me, and the foreseeable generations ahead, Saturn is a large planet with a permanent ring around the middle. But as far as the universe’s timeline is concerned, Saturn is a large planet that once decided to wear a floating waist belt for a short period of time—for about a couple of hundred million years, to be precise. A study published earlier this month predicts that Saturn’s rings will be gone in less than a hundred million years.

James O’Donoghue, the lead author of the study that was published in the science journal Icarus earlier this month, said in a statement to NASA, “We are lucky to be around to see Saturn’s ring system, which appears to be in the middle of its lifetime. However, if rings are temporary, perhaps we just missed out on seeing giant ring systems of Jupiter, Uranus and Neptune, which have only thin ringlets today!”

Saturn’s rings span approximately 2,73,590 kilometres across and are visible from Earth with the help of a telescope. Scientists have debated for a long time now how Saturn’s rings came to be. According to The Washington Post, some theories suggest that the rings are debris left over from the planet’s formation over 4 billion years ago, while other theories suggest that they’re made up of external elements like comets, asteroids, and even broken moons.

Though the rings appear solid, observations by spacecrafts Voyager and Cassini tell us that they’re made of floating pieces of material, ranging greatly in size. Some are simply tiny specks floating around, while others are as large as the Empire State Building. Observations by O’Donoghue and his colleagues reveal that a combination of Saturn’s gravity and magnetic pull draws new elements towards the planet every thirty minutes. Combined with the observations from Voyager and Cassini, the study predicts that the rings have less than a hundred million years left around Saturn’s midriff.