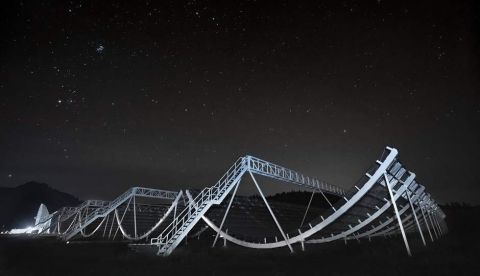 A team of scientists picked up fast radio bursts (FRBs) from deep space. Do you believe aliens are trying to contact us?

A team of scientists from the National Research Council of Canada say they picked up repeated blasts of radio signals from deep space. More specifically, the team reports that it spotted as many as thirteen fast radio bursts (FRBs) at a radio frequency as low as 400 Mhz when it was in the process of setting up the Canadian Hydrogen Intensity Mapping Experiment (CHIME) using the CHIME/FRB instrument. The team reported its findings and experience in an online paper on Nature.

Fast radio bursts are quick, highly dispersed radio flashes coming from far outside the Milky Way. According to the scientists, one of the thirteen radio bursts had the lowest dispersion measure ever reported, which means that it was the closest one received yet. The bursts, though only a millisecond in duration, were transmitted with the same amount of energy the sun takes a year to produce. According to recent report on the subject by MSN, these bursts have been speculated to be the result of everything—from exploding stars to alien communication.

"Until now, there was only one known repeating FRB. Knowing that there is another suggests that there could be more out there," said Ingrid Stairs, a member of the CHIME team and an astrophysicist at the University of British Columbia. "And with more repeaters and more sources available for study, we may be able to understand these cosmic puzzles—where they’re from and what causes them."

The thirteen fast radio bursts, which were picked up in a period of three weeks, are expected to serve scientists as valuable and interesting data in the study of life beyond our planet and universe. In the meantime, this development is expected to be fodder for those who dream of life in deep space. A Reddit user, for one, has already begun a discussion thread on the matter this morning.

Related Read: China's lunar probe lands on the dark side of the moon