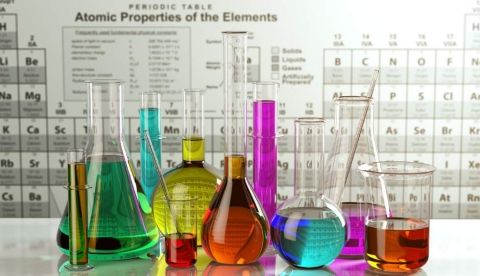 It’s time to play The Elements song by Tom Lehrer.

It’s 1869. An energetic 35-year-old Russian named Dmitri Mendeleev is writing the second volume of his book titled The Principles of Chemistry while teaching at the Technical Institute in St Petersburg. On a cold winter day in March, his mind is preoccupied with a certain table structure he is certain will reveal to him all the known elements in some logical way. Having written the names of all 65 known elements on small individual cards along with their fundamental properties, Mendeleev moves them around on a table to find the right logical order. Weary, he naps at his table, but when he awakes, something significant is born from his mind—the periodic table.

Can you believe it? One and half centuries have passed since that historic day when Dmitri Mendeleev formulated the first periodic table. Today, the Periodic Table of Chemical Elements (as it’s officially called by the UNESCO) is a representation of not 65 but 118 known elements. Notable scientists like Lord Rayleigh and Antoine-Laurent de Lavoisier have contributed to it. The table has been published in innumerable textbooks and reference books. We’ve all had it in our science lessons through school and college. Why, Tom Lehrer even wrote a song about it.

To celebrate the periodic table’s 150th anniversary, UNESCO launched The International Year of the Periodic Table of Chemical Elements 2019, a day of conferences and debates to highlight the significance of the periodic table and relevant challenges for sustainable societies across various fields like medicine and energy. The day-long programme took place on January 29 at the UNESCO headquarters in Place de Fontenoy‎, Paris. The programme included a lecture by Ben Feringa, a Nobel Laureate in Chemistry.

For those seeking a refresher on the subject, the periodic table is a tabular representation of known chemical elements, arranged by atomic number, electron configuration, and recurring properties. The seven rows of the table are called periods, and the eighteen columns are called groups. Elements in a period have the same number of atomic orbitals, and elements in a group have the same number of electrons in the outer orbital (aka valence electrons). Head over to Wikipedia if you want to continue learning about the periodic table, or to Famous Scientists to read more about Dmitri Mendeleev.