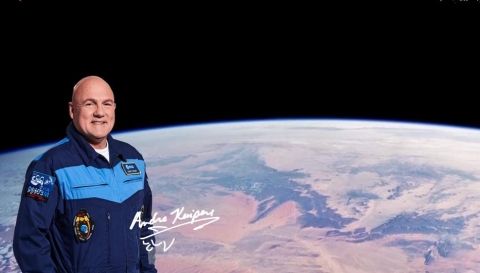 In an out-of-this-world blunder, Dutch astronaut dialled 911 from the International Space Station, which sent a security team 350 kilometres below scurrying for signs of trouble.

Can you imagine what the security team at NASA's Johnson Space Center must've felt when they came to know that an astronaut aboard  the International Space Station had just dialled 911? That's exactly what happened a couple of days ago when Dutch astronaut André Kuipers dialled the American emergency services number by accident from space. The security team at NASA raced to the room through which his call had connected only to find out nothing had happened.

The sixty-year-old astronaut later explained himself in a radio programme by Dutch broadcasting network Nederlandse Omroep Stichting, "First you dial the 9 for an outside line, and then 011 for an international line. I made a mistake, and the next day I received an email message: Did you call 911?" Kuipers even quipped that he was a little disappointed that no one had come up to the space station to check.

The phone system aboard the International Space Station uses Voice over Internet Protocol (VoIP) to allow astronauts on-board to place calls the way we would on Earth with Skype. The system has been around for a decade now, said Wayne Hale to National Public Radio. "A capability that was built into the ISS, with the rise of Internet phone calls, is the ability for the astronauts in the space station to just dial up anybody that they might want to," Hale had said. "Many people have gotten calls from space."

This isn't the first time an astronaut has misdialled from space. Some three years ago, British astronaut tweeted to apologise to a woman he had apparently called by mistake during his voyage aboard the International Space Station. Though it's possible to call any number from the space station, the converse isn't; you can't make a call to an astronaut on the space station.