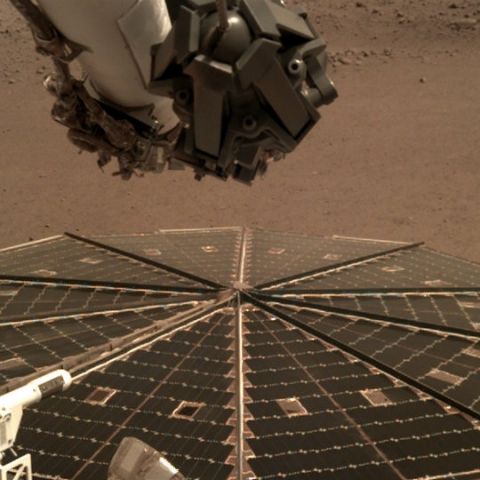 Two sensors on the Insight rover, one on its deck and another inside the machine, recorded rumbling vibration of the wind moving over the rover.

On November 27 2018, NASA’s InSight rover successfully landed on Mars and soon after set a record for generating the highest amount of solar power in a given day on the Red Planet. The rover accomplished the feat with the help of two, seven feet wide solar arrays that are said to produce 600 to 700 watts of power on a clear day. Now, the machine’s sensors captured the first ever wind sounds on Mars. Two of its sensors apparently caught low rumbling vibrations that are caused by the wind, which was blowing between 5 to 7 meters per second and since the two sensors were placed in different positions, the captured sounds also vary.

One of the sensors to record sounds of the Martian wind is an air pressure sensor inside the lander. The other sensor is a seismometer that is currently sitting on the machine’s deck and is waiting to be placed on Mars’ surface by InSight's robotic arm. While the air pressure sensor recorded air vibrations directly, the seismometer recorded the noise produced by the solar panels as the wind blew over them. As per NASA's Jet Propulsion Laboratory, this is the only phase where the seismometer is capable of detecting any vibrations produced by the lander. This is because, in a few weeks, the sensor will be placed on the Martian surface and covered by a domed shield that protects it from changing wind and temperature. The device will then commence measuring vibrations from deep inside the red planet to help scientists better understand its interior. We recommend you plug in your headphones to hear the sounds of wind blowing on Mars.

The detected “sound” of wind on the Martian surface by the seismometer is quite low pitched and difficult to hear. Jet Propulsion Laboratory (JPM) released a video with the original version of the audio and then one where the sound was raised two octaves to make it more perceptible. Additionally, the air pressure sensor recorded the sound, which is 10 hertz below the lower range of human hearing. This audio was sped up by a factor of 100 to shift its frequency to a higher range and make it more audible.

"The InSight lander acts like a giant ear," said Tom Pike, InSight science team member and sensor designer at Imperial College London. "The solar panels on the lander's sides respond to pressure fluctuations of the wind. It's like InSight is cupping its ears and hearing the Mars wind beating on it. When we looked at the direction of the lander vibrations coming from the solar panels, it matches the expected wind direction at our landing site." Scientists at NASA aim to record even clearer sound of the Martian atmosphere with Mars 2020 rover, which is scheduled to land on the red planet with two microphones onboard. It will be the first time ever a Mars landing is expected to be recorded.