Good old Curiosity is off to a clay-bearing region in Mount Sharp. But before that, it snaps a quick selfie. 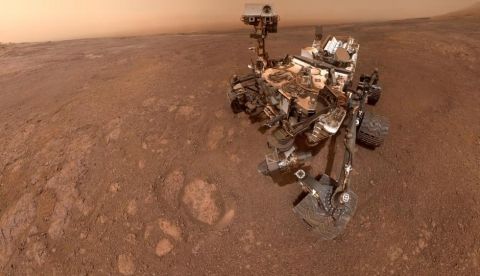 NASA’s long-standing Martian rover Curiosity has shared a selfie with us before permanently leaving Vera Rubin Ridge, its home for the last one year or longer. The lone rover now has its sights set on a clay-bearing region of Mount Sharp, which is in a trough south of the ridge. Curiosity’s bright and clear selfie can be found in a news release that was sent out by NASA’s Jet Propulsion Laboratory yesterday.

According to the news release, the rover drilled its nineteenth sample in an area on the ridge called Rock Hall on December 15. A month later, Curiosity captured a series of 57 images using its robotic arm and Mars Hand Lens Imager (MAHLI) tool. These 57 images were later stitched together into this one selfie we see now. To the lower left of the rover is where the drill hole was made at Rock Hall, but it may not be visible to the naked eye because of the many regional dust storms the Red Planet sees around this time of the year.

According to NASA, Curiosity has been exploring the ridge area since September 2017. The new “clay-bearing unit” it’s about to explore near the mountain may hold more clues about the ancient lakes that helped form the lower levels of Mount Sharp, explains NASA. Mount Sharp forms the central peak within Gale crater. From the valley floor, the mountain stands 18,000 feet high. It was named Mount Sharp after the late American geologist, Robert P. Sharp.

Curiosity’s casual selfie comes to us two months after NASA’s InSight rover touched down safely on Mars after a fiery voyage into the planet’s atmosphere. Like Curiosity, InSight is also on a serious quest. InSight will study the planet’s deep interior for the first time. It will measure ground motions over a large range of frequencies and the amount of heat escaping the surface, among other things. InSight will also investigate the perturbations on the planet’s rotation axis, giving us more information about the planet’s core.