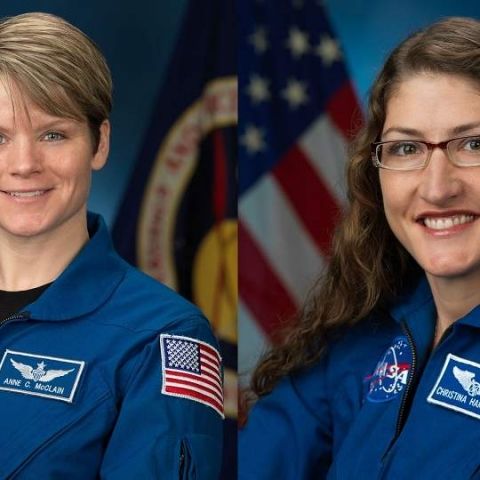 The spacewalk is set to happen on March 29.

NASA astronauts Christina Koch and Anne McClain are all set to embark on what will become the first ever all-female spacewalk. According to a recent CNN report, the duo will step outside the International Space Station and perform a seven-hour spacewalk as part of Expedition 59 on March 29. McClain is already aboard the space station as part of Expedition 58 while Koch will blast off from Earth on March 14.

The March 29 spacewalk will mark McClain’s first spacewalk and Koch’s first spaceflight. “It is the second in a series of three planned spacewalks. Anne also will join Nick Hague for the March 22 spacewalk. And, of course, assignments and schedules could always change,” NASA spokesperson Stephanie Schierholz told CNN. “It was not orchestrated to be this way; these spacewalks were originally scheduled to take place in the fall.”

The news of the spacewalk was first broken to the public by flight controller Kristen Facciol of the Canadian Space Agency, who tweeted a few days ago, “I just found out that I'll be on console providing support for the FIRST ALL FEMALE SPACEWALK with @AstroAnnimal and @Astro_Christina and I can not contain my excitement!!!!” Facciol’s excitement seems justified given the fact that up until now spacewalks have always included a male member.

Both McClain and Koch are part of the 2013 astronaut class, which contained fifty percent  women. According to NASA, even the most recent class of flight directors was fifty percent women. The March 29 spacewalk will be an occasion to remember for all of us just like the first time a woman walked in space, which happened on July 25, 1984 when Soviet cosmonaut Svetlana Savitskaya participated in a spacewalk aboard Salyut 7.

I just found out that I’ll be on console providing support for the FIRST ALL FEMALE SPACEWALK with @AstroAnnimal and @Astro_Christina and I can not contain my excitement!!!! #WomenInSTEM #WomenInEngineering #WomenInSpace