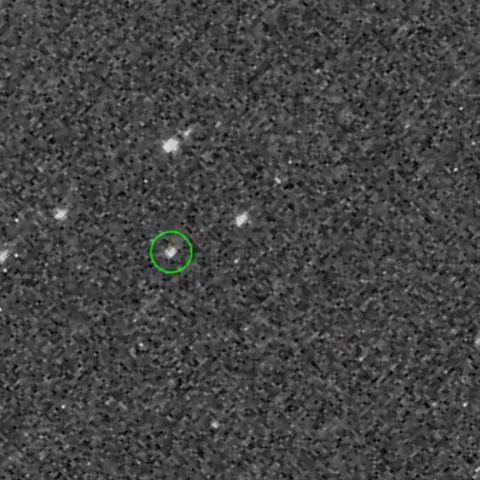 NASA’s spacecraft OSIRIS-REx is only 2 million kilometres away from its destination asteroid Bennu.

Back in 2016, NASA launched OSIRIS-REx in a mission to fly to the asteroid Bennu and collect a small sample of the rock’s surface. As of last Friday, the spacecraft has begun the ‘asteroid operations’ phase of its mission where it will first take photos of the rock and survey its surroundings for possible hazards. At the moment, the spacecraft is a little over 2 million kilometres (1.2 million miles) away from Bennu. It’s expected to reach Bennu on December 3.

In March we learnt that Bennu has a 1 in 2,700 chance of colliding with our dear planet we call home. According to Lawrence Livermore National Laboratory, Bennu is a beast of an asteroid in terms of size. It spans more than five football fields in diameter and weighs 1,664 times more than the Titanic. If Bennu hits the Earth, the impact would release 80,000 times the energy of the atomic bomb that struck Hiroshima in 1945. So, we have enough reason to learn more about it and its composition.

For this reason, and because Bennu might contain valuable resources that could be used for future space exploration mission, NASA sent OSIRIS-REx (Origins, Spectral Interpretation, Resource Identification, Security - Regolith Explorer) in 2016 to gather a sample of the rock. According to a report by Mashable, Dante Lauretta, the Principal Investigator of OSIRIS-REx  at the University of Arizona, Tucson, believes OSIRIS-REx could one day serve as a “fuel depot” in outer space as it holds a lot of clay deposits. Clay is formed by mixing water, and water is composed of hydrogen and oxygen. These are two necessary components for rocket fuel.

Upon arrival, NASA’s OSIRIS-REx will spend the first month performing fly-bys of the asteroid’s north pole, south pole, and equator from a distance ranging between 19 and 7 kilometres (11.8 and 4.4 miles). After the sample has been gathered, OSIRIS-REx will head back to Earth and eject the “Sample Return Capsule” for reentry and a safe landing in the Utah desert in September 2023.