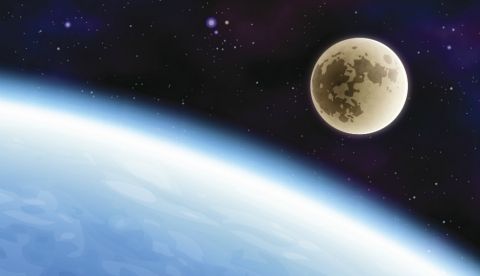 A new model suggests the Moon was born out of materials from the Earth and not from the Mars-sized impacting body that collided with our planet nearly 4.5 billion years ago.

For decades now, scientists have wondered how the Moon came to be and what it consists of. The most popular theory says that the Moon consists of materials from a Mars-sized celestial body from the time it collided with Earth approximately 4.5 billion years ago. However, new research data from NASA suggests otherwise. It suggests that our Moon consists of materials found on Earth and not from the Mars-sized impactor. The new research comes from analyses made recently and samples collected from the Moon nearly fifty years ago during the Apollo missions.

The findings of the recent research have been published in the journal Science Advances by Kevin Righter of the Astromaterials Research and Exploration Science Division (ARES) at NASA’s Johnson Space Center in Houston, Texas. He questions the popular, long-standing theory that the Moon contains elements from the Mars-sized impacting body and believes that they’re actually from Earth. He says this after modelling the composition of the Moon while considering several deciding factors like post-impact disk processes and the formation of the Moon’s small metallic core.

Righter created a “bulk Moon” model composition similar to that of our planet to compare the concentrations of 14 volatile siderophile (metal-loving) elements from the Moon samples with his calculated values. To everyone’s surprise, he found a strong correlation with 9 out of the 14 elements, suggesting that the Moon does not contain elements from the Mars-sized impactor. “By simulating the main processes contributing to the Moon’s formation and early differentiation, we were able to predict the level of each element that should be present in the Moon’s mantle,” commented Righter in a recent NASA press release.

Righter firmly believes that more research is required to understand the dynamic environment of the post-impact disk better and hopes that his own research brings about a deeper dive into the matter. “Scientists in the 1970s recognized the very low levels of some of these volatile elements in lunar samples,” the scientist added. “Much lower than concentrations in the Earth. But lack of experimental data in the 1970s hindered scientists from a complete understanding of these low lunar concentrations.”

Related Read: China's lunar probe lands on the dark side of the moon