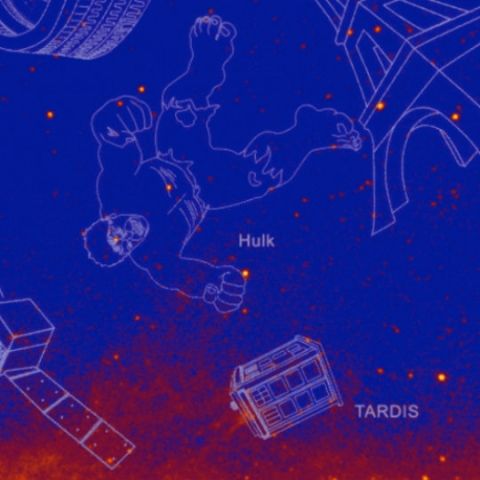 Celebrating the 10-year operation of the Fermi Gamma-ray Space Telescope, Scientists at NASA have come up with a set of 21 modern constellations that were constructed from sources in the gamma-ray sky. The new constellations have been unofficially named after some notable fictional characters and objects like the Little Prince, Hulk, Thor’s Mjolnir, U.S.S. Enterprise from Star Trek and more. “Developing these unofficial constellations was a fun way to highlight a decade of Fermi’s accomplishments,” said Julie McEnery, the Fermi project scientist at NASA’s Goddard Space Flight Center in Greenbelt, Maryland. “One way or another, all of the gamma-ray constellations have a tie-in to Fermi science.”

Fermi’s Large Area Telescope (LAT) has been looking into space every day and scanning, mapping and measuring it since July 2008. The telescope has been specifically attuned to pick up sources of gamma rays, which may originate from “pulsars, nova outbursts, the debris of supernova explosions, and giant gamma-ray bubbles located in our own galaxy, or supermassive black holes and gamma-ray bursts — the most powerful explosions in the cosmos — in others.” 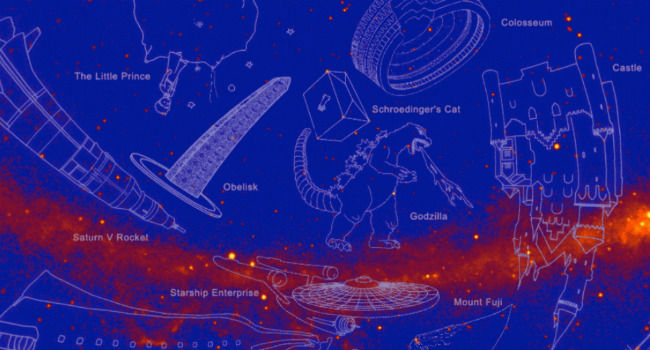 “By 2015, the number of different sources mapped by Fermi’s LAT had expanded to about 3,000 — 10 times the number known before the mission,” said Goddard’s Elizabeth Ferrara, who led the constellation project. “For the first time ever, the number of known gamma-ray sources was comparable to the number of bright stars, so we thought a new set of constellations was a great way to illustrate the point.”

Some of the constellations are also named after famous landmarks like the Washington Monument and Mount Fuji in Japan. However, some names have been picked from scientific ideas or tools like the Schrödinger’s Cat, Radio Telescope and also Black Widow Spider, which is a reference to a class of pulsars that evaporate their companion stars. There’s also an interactive web-based tool to experience the constellations that one can check out here.