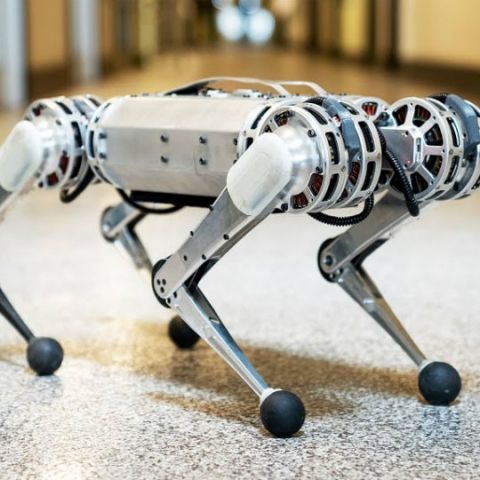 The Mini Cheetah is a research project by MIT. Along with performing backflips, it can also move sideways and rebalance itself.

With all the new developments happening in various aspects of science, the future does seem exciting. Adding to the list of growing achievements, MIT has unveiled a new smaller version of its Cheetah 3 robot called the Mini Cheetah. While backflip-performing robots are not a new thing, the Mini Cheetah is claimed to be the first four legged robot that can do the trick. However, doing backflips is not the only thing it has been taught. The quadruped robot weighs around 9 kg and can trot at 2.5m/s under half its actuator torque and speed, meaning it can go even faster if required.

The Mini Cheetah can also trot, run, and move sideways. It can also perform independent translation and rotation, which looks like the bot is chasing its own non-existent tail without tripping up. The video shows that the quad-legged robot is also adept at regaining its balance when someone tries to kick it, and it can also get up by itself if it falls down. The clip instantly reminded us of Black Mirror. It should be noted that unlike the Boston Dynamics’ SpotMini that is meant for commercial use, the Mini Cheetah is a research project and won’t be seen chasing someone down the street.

As seen from the video above, Mini Cheetah can easily navigate through uneven terrain. We have seen some other robots that can also do the same but feature a different design. For example, there's a snake-like robot created under a joint project between researchers at the Kyoto University Mechatronics Lab and the University of Electro-Communications in Japan. The flexible bot, capable of climbing ladders, could be helpful in rescue operations for scaling obstacles and navigating through terrains where humans can’t reach easily. The robot makes use of a gait design method that enables it to climb by connecting simple shapes.

While there are many robots that draw inspiration from nature, Boston Dynamics’ Atlas humanoid robot has also been updated quite a few times, to such an extent that it can perform parkour. The robot was previously seen in a video where it jumped over logs and climbed steps without breaking its pace.