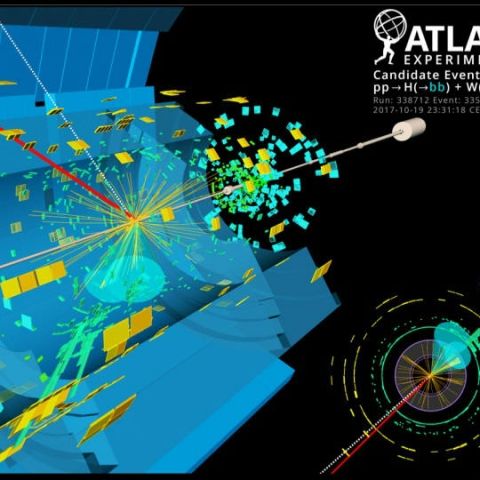 ATLAS and CMS collaborations have finally led to the observation of the decay of the Higgs boson into more fundamental particles called bottom quarks.

It’s been six years since the discovery of the Higgs boson and finally, the elementary particle has been observed decaying into more fundamental particles known as bottom quarks, say scientists at CERN today.

The findings presented by the ATLAS and CMS collaborations at the Large Hadron Collider are so far consistent with the hypothesis that the all-penetrating quantum field behind the Higgs boson also gives mass to the bottom quark. The Large Hadron Collider (LHC) is the world’s largest and most powerful particle accelerator, and it’s located in a tunnel beneath the France-Switzerland border.

The Standard Model of particle physics predicts that about 60 percent of the time a Higgs boson will decay to a pair of bottom quarks, the second-heaviest of the six flavours of quarks, says CERN in a report. Bottom quarks also go by the name of b quarks or beauty quarks.

The reason why testing this hypothesis is important is because it’s what would either support the Standard Model or dismiss it completely. The Standard Model stands by the idea that Higgs field empowers quarks and other fundamental particles with mass.

“This observation is a milestone in the exploration of the Higgs boson. It shows that the ATLAS and CMS experiments have achieved deep understanding of their data and a control of backgrounds that surpasses expectations. ATLAS has now observed all couplings of the Higgs boson to the heavy quarks and leptons of the third generation as well as all major production modes,” commented Karl Jakobs, a spokesperson of the ATLAS collaboration.

According to the scientists, spotting this common Higgs boson decay is hard, and that’s because there are many other ways of producing bottom quarks in proton-proton collisions. This makes it difficult to isolate the Higg boson decay signal from the ‘background noise’ associated with such collisions. To find and extract the signal, the collaborating teams from ATLAS and CMS shared data from the first and second runs of the Large Hadron Collider. Then they applied complex analysis methods to the shared data. The result was the detection of the decay of the Higgs boson.