Researchers know of no known way in which an intermediate mass black hole could possibly form from the remains of a dead star. It is an object so massive that it simply should not be allowed.

This is the farthest source from which gravitational waves have been detected by LIGO and Virgo. 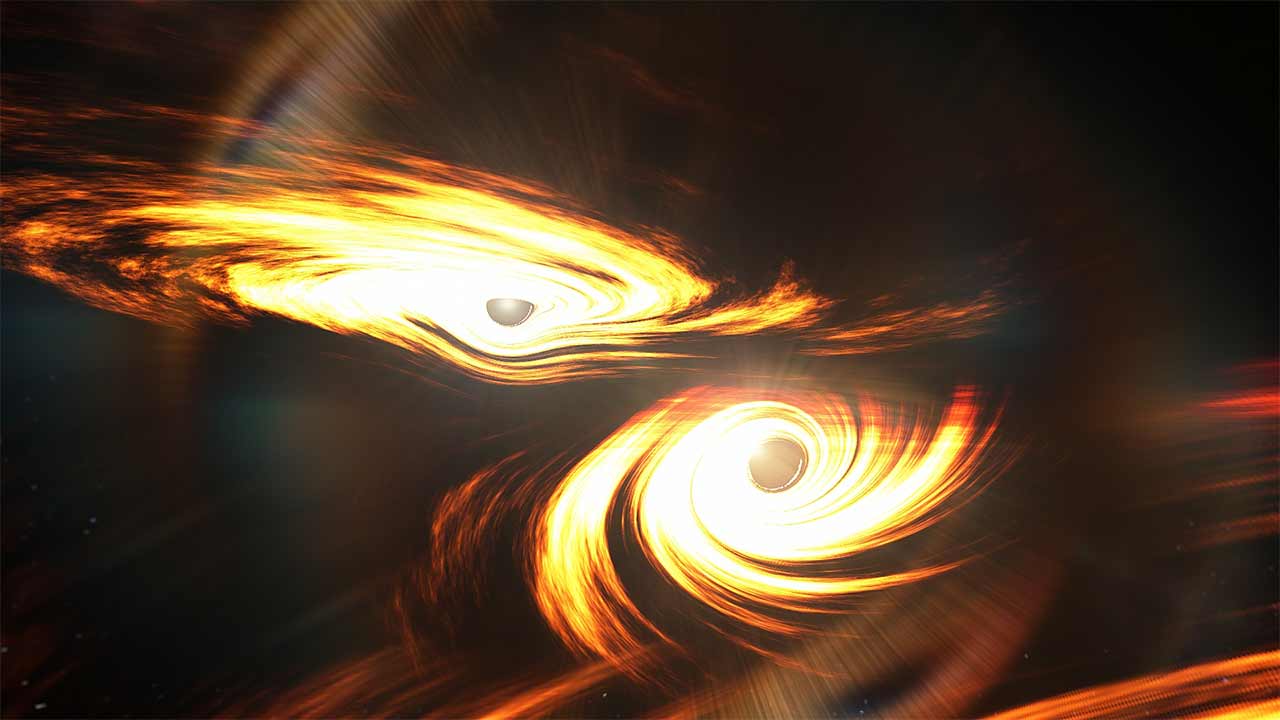 The LIGO/Virgo collaboration has announced another gravitational wave detection, the event being called GW190521. The nomenclature is based on the date of the detection, which was 21 May, 2019. The two LIGO detectors in the USA and the Virgo detector in Italy all picked up the gravitational waves originating from the merger of two black holes. This particular detection is interesting for a number of reasons. It is the largest ever black hole detected through gravitational waves. The remnant object, which was the result of the collision, weighs 142 solar masses, and is the first intermediate mass black hole to be detected. The two black holes that merged were 66 and 85 solar masses, and these two objects as well are in mass ranges of black holes that were never before seen. The event was so colossal that 8 solar masses were radiated as gravitational waves, which were detected by the three observatories on Earth.
When it comes to black holes,
Most detections of gravitational waves from black hole mergers are described as “chirps”. This one was so massive that it is being described as a bang. The signal observed was of an extremely short duration, lasting less than one tenth of a second. It originated from a source that is 17 billion light years away, in the direction of the constellation of Phoenix. However, the signal itself was formed when the universe was only half its current age. This is the farthest source from which gravitational waves have been detected by LIGO and Virgo. 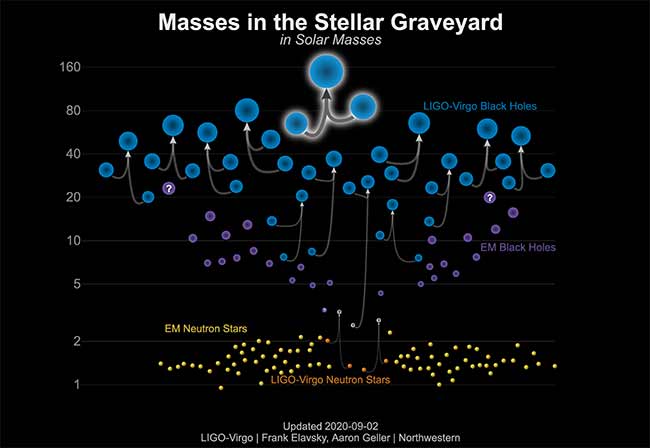 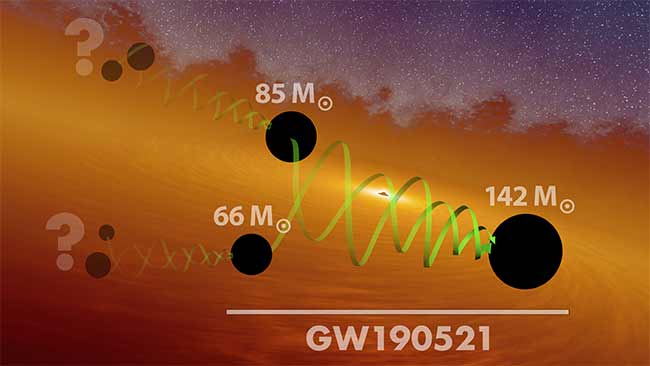 Apart from the mass gap between stellar mass black holes and supermassive black holes, there is another mass gap where again there have been few detections of objects. In stars that go nova followed by a core collapse, a star that weighs as much as 130 solar masses can at best produce a black hole that are up to 65 solar masses. Of the original star was more massive than 130 solar masses, then it would result in a phenomenon called pair instability, where the photons in the core turn into an electron and antielectron pair. The resulting nova is so explosive that even the core gets vaporized, leaving behind only energy, clouds and dust. There is no black hole. Even more massive stars would just collapse into black holes directly, because of their immense gravitation. So a 200 solar mass star would collapse to a black hole of 120 solar masses. This is why theoretically, there should not be any black holes between 65 to 120 solar masses, which is known as the pair instability gap. Yet, both the objects that merged to form the remnant, are in the pair instability gaps. These two black holes also have no business existing!
Berry explains how these black holes in the pair instability gap can potentially form, “there are many ideas about how to get around this — merging two stars together, embedding the black hole in a thick disc of material it can swallow, or primordial black holes created in the aftermath of the Big Bang. The idea I really like is a hierarchical merger where we have a black hole formed from the previous merger of two smaller black holes.”
Nelson Christensen, director of the Artemis Laboratory at the Nice Observatory in France, says, “The fact that we’re seeing a black hole in this mass gap will make a lot of astrophysicists scratch their heads and try to figure out how these black holes were made.”
Out of all these the hierarchical merger is at present the most favoured theory. The two progenitor black holes in the pair instability mass gap, that merged to form the remnant, were themselves the remnants of previous mergers between black holes, which could have been stellar mass black holes. The resulting object could be the result of a series of mergers between black holes, where they became increasingly larger.
The two gaps in the observed masses of black holes so far, are also known as the upper gap and the lower gap. The observations indicate that it was indeed a merger of two black holes, but the short duration of the signal can mean that the GW190521 event was not a black hole merger at all. There are two types of searchers for the signals detected at the LIGO and VIrgo detectors. The first is an algorithm that looks specifically for binary mergers, such as between neutron stars or black holes. The second is a burst detection algorithm that basically looks for any kind of event that produces gravitational waves. The detection of GW190521 was picked up by the burst algorithm for searching, which raises the possibility that the gravitational waves may not have been caused by the merger of two black holes at all. The exotic interpretations include the source being a collapsing star, or a cosmic string produced during the dawn of the Universe, during a period of rapid inflation just after the Big Bang. Alan Weinstein, a physics professor at Caltech says, “Since we first turned on LIGO, everything we’ve observed with confidence has been a collision of black holes or neutron stars. This is the one event where our analysis allows the possibility that this event is not such a collision. Although this event is consistent with being from an exceptionally massive binary black hole merger, and alternative explanations are disfavored, it is pushing the boundaries of our confidence. And that potentially makes it extremely exciting. Because we have all been hoping for something new, something unexpected, that could challenge what we’ve learned already. This event has the potential for doing that.”