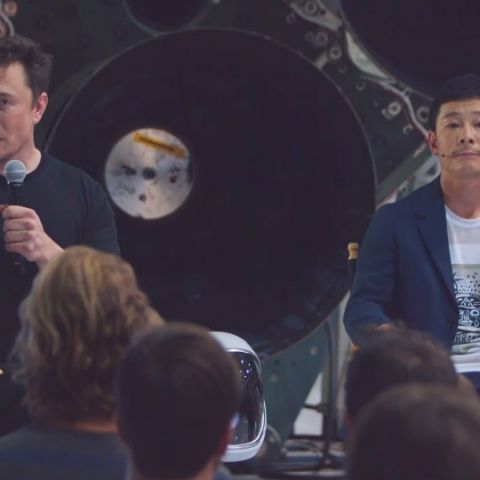 Online fashion tycoon Yusaku Maezawa will be the first tourist to go around the moon, along with 6 or 8 artists, whom he’ll pick personally.

A few days ago, we reported that SpaceX would announce its first tourist astronaut to the moon on Monday. As planned, SpaceX CEO Elon Musk named Yusaku Maezawa, an online fashion tycoon, yesterday as the first person to fly on a big SpaceX rocket all the way to the moon and back as early as 2023. According to a report on the matter by CNBC, Maezawa plans to take six to eight artists along with him on his journey around the moon.

“Ever since I was a kid, I have loved the moon. It's always there and continues to inspire humanity,” commented Maezawa. The fashion artist and art curator is the founder of online retailers Start Today and Zozotown and is one of the richest people in Japan. “This is a project that I designed and made: #dearMoon,” he announced.

“I choose to go to the moon with artists,” he continued. “In 2023, as the host, I would like to invite 6 to 8 artists from around the world to join me on this mission to the Moon.” The forty-two-year-old fashion tycoon has yet to decide which artists to take along for the 2023 moon ride. Maezawa will be the first person to visit the lunar orbit since NASA’s last Apollo mission way back in 1972.

The first private passenger to fly around the Moon aboard BFR is fashion innovator and globally recognized art curator Yusaku Maezawa.

Maezawa sent out several tweets to tease his announcement by saying there was a “big announcement” coming “about mid September.” A day after SpaceX announced it was poised to identify its first lunar traveller, he tweeted, “there are no limits.” SpaceX did not reveal how much the lunar voyage cost Maezawa. Elon Musk commended Maezawa for his bravery because he believes the mission will be dangerous.

When it’s finally time to fire away, Maezawa and his team will be sitting inside the SpaceX-designed BFR (Big Falcon Rocket), which is a reusable rocket costing the space agency around $5 billion to build and launch. SpaceX envisions the BFR to be a very versatile rocket—one that can be used for clearing up debris in space, for sending up satellites, for making “point-to-point” trips down on Earth, etc.