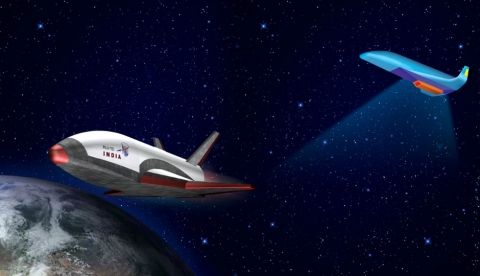 ISRO is working on Reusable Launch Vehicles (RLV) and the space agency’s chairman says that it is working on a reusable launch technology for recovering the first and second stages of a rocket.

Elon Musk’s SpaceX managed to pull off something spectacular by making rockets that can land after being used and can be reused again. However, the Indian Space and Research Organisation (ISRO) also aims to accomplish the same with its Reusable Launch Vehicle (RLV) that it first tested on May 23, 2016. In a recent press briefing, ISRO Chairman, Dr K Sivan reiterated the space agency’s agenda of making RLV’s a reality and while SpaceX has managed to recover the first stage of a rocket, ISRO aims to go a step further by not only recovering the first but also the second stage of a rocket. Sivan also talked about India’s first manned mission flight, Gaganyaan, and said that the mission will be able to carry three Indian astronauts and will orbit the Earth for seven days.

As mentioned above, ISRO previously tested its RLV in 2016. Back then, the HS9 solid rocket booster carrying RLV-Technology Demonstrator (RLV-TD) lifted off from the First Launch Pad at Satish Dhawan Space Centre, Sriharikota. After 91.1 seconds, the HS9 burn out took place, after which both, HS9 and RLV-TD, reached to a height of about 56 km and then the RLV-TD separated from HS9 booster and again went up to a height of around 65km. The RLV-TD then descended back into the atmosphere, surviving re-entry, and glided down a defined landing spot over the Bay of Bengal. The next test will be conducted on June-July and it will be different as a helicopter is supposed to take the RLV to a ‘considerable height’ and drop it. The shuttle is said to then glide back to Earth and land on an airstrip. The landing strip could be set in the Andaman and Nicobar islands but this is currently speculation.