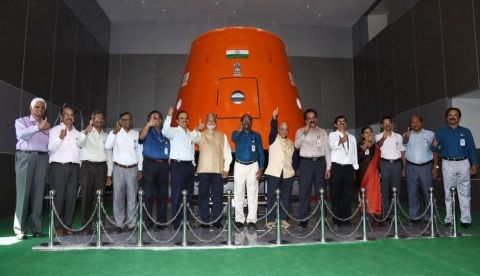 The Indian Space Research Organisation (ISRO) inaugurated the Human Space Flight Centre (HSFC) at its headquarters in Bengaluru yesterday. The new centre will be the home of all crewed missions by ISRO in the future, including the GAGANYAAN project. The government-owned space agency made the announcement of its new inauguration on its official Twitter account, along with a picture of the dignitaries present and a full-scale model of of GAGANYAAN’s crew module. While S Unnikrishnan Nair serves as the Founder and Director of the HSFC, R Hutton is the Project Director for the GAGANYAAN project.

The grand opening was made by K Kasturirangan, the Former Chairman of ISRO in the presence of K Sivan, the incumbent Chairman and Secretary of the Department of Space at ISRO. “HSFC shall be responsible for implementation of GAGANYAAN Project which involves end-to-end mission planning, development of Engineering systems for crew survival in space, crew selection and training and also pursue activities for sustained human space flight missions. HSFC will take support of the existing ISRO Centres to implement , the first development flight of GAGANYAAN under Human Space Flight Programme,” reads the news release from the Indian space agency.

ISRO began work on its human spaceflight programme way back in 2009 with a budget of Rs 12,400 crore. Prime Minister Narendra Modi announced on August 25 last year that India would put astronauts in space by 2022 as part of the GAGANYAAN mission. If everything goes to schedule, India will be the fourth country to carry out crewed missions indigenously, after Russia, the US, USSR, and China. The entire project is projected to cost less than Rs 10,000 crore. The Geosynchronous Satellite Launch Vehicle Mark-III (GSLV III) is expected to be the launch vehicle for the mission.

Only last week ISRO delivered two satellites into space. Kalamsat, the first satellite, was designed and developed by members of a Chennai-based organisation on a budget of Rs 12 lakh. It was the first payload to use PS4, the fourth stage of the vehicle, as a platform to orbit the earth. Microsat-R, the second satellite, was built by the Defence Research and Development Organisation (DRDO) for military and imaging purposes.