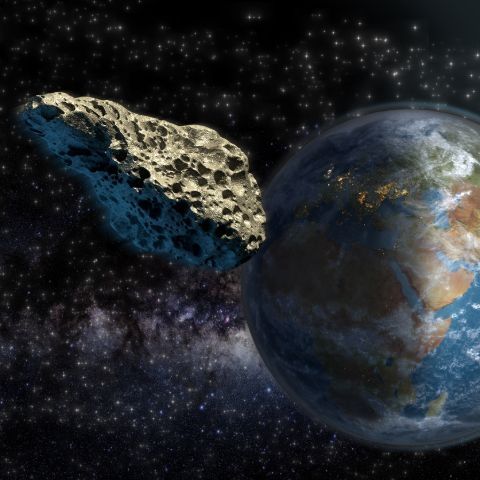 Asteroid 2008 KV2 is passing by today at 6.7 million kilometres from Earth.

The asteroid is reported to be three times longer than a football field.

It’s not every day that we get to witness a huge cosmic object fly by our planet, especially an object this large. Named 2008 KV2, the object in question is an asteroid that’s reported by Space.com to be three times the length of a football field. The asteroid is expected to swing by at a distance of about 6.7 million kilometres from our planet today. Even though its distance from our planet is great, one should be able to observe 2008 KV2’s flyby using the right scientific equipment.

For those of you worried that 6.7 million kilometres may be too close for comfort, here’s some perspective. The moon is approximately 3,84,400 kilometres away from us. In comparison, the asteroid is about 17 times farther than that. So there’s little need to worry about a head-on collision with the flying leviathan. 2008 KV2 is expected to be flying with 0.05 astronomical units of Earth. In other words, the big rock is expected to be doing around 40,800 kilometres per hour when it passes us by.

As you probably have worked it out by now, our cosmic guest was first discovered by scientists in 2008. Since 2008 KV2 is orbiting the sun as well, it’s expected to make another pass in 2021 and two more in 2022. Although the rock is travelling millions of kilometres away from us, it’s labelled as a “potentially hazardous asteroid” by NASA. This is mostly because of its size and distance from us. After all, 2008 KV2 is classified by experts as a Near Earth Object (NEO).

According to a report by Interesting Engineering, asteroids have been talked about a lot at NASA of late. Another huge asteroid that’s expected to swing by our planet later is Apophis. But that won’t happen till April 13, 2029. “We already know that the close encounter with Earth will change Apophis' orbit, but our models also show the close approach could change the way this asteroid spins, and it is possible that there will be some surface changes, like small avalanches,” Davide Farnocchia, an astronomer at JPL's Center for Near Earth Objects Studies (CNEOS), was quoted as saying.