The geocorona around our planet is large enough to envelop the Moon. 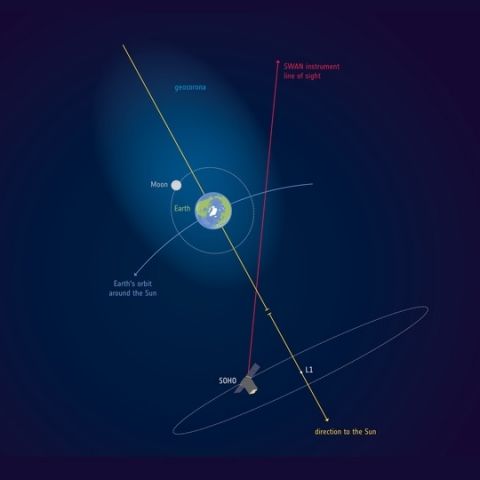 A recent discovery made by the scientists at ESA/NASA’s Solar and Heliospheric Observatory (SOHO) is making all of us do a double take. According to the study, the gaseous layer around Earth covers a distance as big as 6,30,000 kilometres from the planet, enough to envelop the Moon. In other words, that’s fifty times the diameter of our planet. This observation is both interesting and surprising because this part of the atmosphere was believed to be far shorter in the past.

For a long time now, scientists have debated where Earth’s atmosphere actually ends. According to the definition accepted by the Fédération Aéronautique Internationale (FAI), the Kármán line (or the line denoting the end of Earth’s atmosphere and the beginning of space) lies about 100 kilometres from the Earth’s surface. The new research made by scientists at SOHO is bound to question that definition once more.

“The Moon flies through Earth's atmosphere,” says Igor Baliukin of Russia’s Space Research Institute, the lead author of the paper that presents the study’s results. “We were not aware of it until we dusted off observations made over two decades ago by the SOHO spacecraft.” Around the area where Earth’s atmosphere merges into outer space is a cloud of hydrogen atoms called the geocorona. During the research, SWAN, one of the space instruments, was able to trace the hydrogen signature and tell us how exactly far the outskirts of the geocorona go.

According to the new study, sunlight compresses hydrogen atoms in the geocorona on Earth’s dayside and creates a region of increased density at night, which can only be observed from space. On the dayside, there are about 70 atoms per cubic centimetre at 60,000 kilometres from Earth and about 0.2 atoms near the Moon. “On Earth we would call it vacuum, so this extra source of hydrogen is not significant enough to facilitate space exploration,” adds Baliukin. He also believes these particles won’t pose any threat to astronauts who go exploring the moon again.