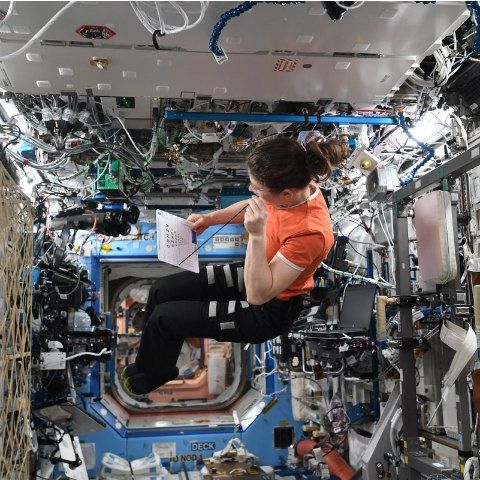 ​Christina Koch to set the record for the longest single spaceflight by a woman.

Her mission will provide data for NASA’s Human Research Program.

Christina Koch is on her way to become the first woman to spend the maximum amount of time aboard the International Space Station (ISS). After getting an extension on her stay, the NASA astronaut will spend a nearly 11 months (328 days) in space and set a record “for the longest single spaceflight by a woman” by staying amidst freezing temperatures, vacuum and stars. She will fall short of the overall American record by Scott Kelly, who stayed in the space for a total of 340 days in 2015-16.

Koch, who arrived at the ISS on March 14 along with NASA astronaut Nick Hague and Roscosmos cosmonaut Alexey Ovchinin, is scheduled to remain in orbit until February 2020. This will eclipse the record of 288 days set by former NASA astronaut Peggy Whitson in 2016-17. She will be part of three expeditions -- 59, 60 and 61 -- during her current first spaceflight. Koch’s extended mission will provide additional data for NASA's Human Research Program and it will continue to support future missions to the Moon and Mars.

One month down. Ten to go. Today the possibility has become reality: My mission is planned to be extended through a third Expedition onboard @Space_Station! Privileged to contribute my best every single day of it. pic.twitter.com/b9RhhNHZzt

“Astronauts demonstrate amazing resilience and adaptability in response to long duration spaceflight exposure. This will enable successful exploration missions with healthy, performance-ready astronauts. NASA is looking to build on what we have learned with additional astronauts in space for more than 250 days,” Jennifer Fogarty, Chief Scientist of the Human Research Program at NASA’s Johnson Space Center in Houston, said in a statement.

As mentioned above, Koch will be a part of three missions, and the schedule is as follows:

On June 24, current Expedition 59 crew members Anne McClain of NASA, David Saint-Jacques of the Canadian Space Agency, and Oleg Kononenko of Roscosmos will return to Earth. Koch, Hague, and Ovchinin will remain aboard the space station and begin Expedition 60.

On July 20, NASA astronaut Andrew Morgan, ESA (European Space Agency) astronaut Luca Parmitano, and Roscosmos cosmonaut Alexander Skvortsov are scheduled to launch to the space station and join Expedition 60, returning the orbiting laboratory’s crew complement to six. Parmitano and Skvortsov will return in February 2020 with Koch, leaving Morgan behind for his extended stay.

On September 25, NASA astronaut Jessica Meir is scheduled to launch to the station with Roscosmos cosmonaut Oleg Skripochka and United Arab Emirates’ Hazzaa Ali Almansoori, a Roscosmos spaceflight participant who will return with Hague and Ovchinin on October 3. Meir and Skripochka will return in spring 2020 with Morgan.

A few hours before we wrote this story about her achievment, Koch tweeted an image of North Carolina from the space.

It took my breath away as it came into focus. My first glimpse of coastal North Carolina from space. It’s a special thing to see from above the place where you grew up--the ocean that first inspired my fascination with things that make me feel small & planted the seed to explore. pic.twitter.com/OZoqiOVtRR