China’s probe on dark side of the moon sprouted a plant, but it died shortly after 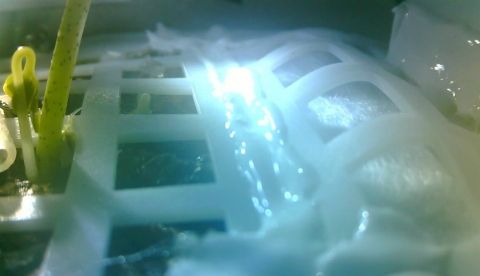 The Chang’e-4 probe carried a canister with seeds and fruit fly larvae. A cotton plant sprouted inside it but it died when the temperature dropped to -180 degrees during night time.

China recently sent a probe on the dark side of the moon to explore the unexplored. Alongside exploration, the Chang’e-4 probe carries a “biosphere” that stores seeds and insect larvae to test whether they will hatch and grow together. In an incredible first, a cotton plant did sprout in the probe’s canister but unfortunately, it died soon after germination. However, this was anticipated since temperatures on the far side of the moon dropped to around -180 degrees when night fell. gbtimes reports that the Professor who led the design of the experiment, Xie Gengxin of Chongqing University, said, “Life in the canister would not survive the lunar night.”

Even though the canister carrying seeds and fruit fly eggs used an array of instruments to regulate the internal environment, temperature dropped to -52 degrees Celsius. As per the report, the contraception didn’t have a battery pack on board that could help control the internal environment at night. The canister housed soil, air, water, potato seeds, Arabidopsis, yeast, and a flowering plant from the mustard family. However, no other plants managed to sprout and the experiment ran for 212.75 hours. During daytime, the temperature will rise again and the now frozen specimens will start decomposing within the canister and are said to not affect the lunar atmosphere. No images of the dead plant or of the canister’s inside have not been released yet.

Chang’e-4’s payload also includes a lander that is equipped with a terrain camera (TCAM), a landing camera (LCAM), and a low-frequency spectrometre (LFS), among other equipments. The payload also consists of a rover, which contains a lunar penetrating radar (LPR), a panoramic camera (PCAM) and other equipments. The rover’s mission is to measure lunar surface temperature, measure chemical compositions of lunar rocks and soil, studying cosmic rays, carrying out low-frequency radio astronomical observation and research, and observing solar corona discharge. Chang’e-4 was launched from the Xichang Satellite Launch Center in Sichuan on a Long March-3B rocket on December 7.

China to land on the dark side of the moon: Report